Sylvanus Freelove (S.F.) Bowser is credited with inventing the first gasoline pump and storage tank combination in 1885. Originally, he invented the pump to dispense kerosene, but as the popularity of gasoline increased with the rise of the automobile, so too did the application of the Bowser pump broaden to include gasoline. With the 1887 patent on his well-received pump, the S.F. Bowser Company was formed, and the way Americans dispensed petroleum products would never be the same. Updated May 18, 2022.

So popular was the pump that “Bowser” became a generic term that could be used to describe any upright pump. In fact, the legacy of S.F. Bowser lives on today, as the term “Bowser” is still used in parts of the world to refer to a storage tank that holds water, fuel, or other liquids. And, some of the original Bowser gasoline storage tanks are still underground today, buried pieces of American history just waiting to be uncovered. Modern environmental regulations now require the excavation and removal of old underground storage tanks, but the pumps themselves have become popular collectors’ items.

In the first half of the 1800s, whale oil was the primary fuel source burned for illumination, from coastal lighthouses to residential lanterns. Then around 1850, petroleum was discovered in the United States, and kerosene became a popular alternative that could be used as fuel for lamps and stoves in American households. However, restocking your supply of kerosene was a messy business. It required taking a fuel can to the store, where they would transfer the kerosene from a wooden barrel to the customer’s container using a ladle. S.F. Bowser knew there had to be a better way. In 1885, he invented the first kerosene pump, that could be utilized by grocers, pharmacies, and hardware stores to conveniently dispense the product to their consumers.

The first unit consisted of a simple pump designed to draw the liquid out of a barrel.  It was sold to a grocery store in Ft. Wayne, Indiana in 1885, and was an instant success. Bowser immediately began to improve his invention, expanding the storage capacity, and adding new applications and customizations.  His company, S.F. Bowser & Co, Inc. manufactured the pumps and storage containers at the newly constructed headquarters in Ft. Wayne, Indiana, and distributed the units across the country and eventually worldwide.

The Rise of Gasoline

In the late 1800s, gasoline was only just starting to gain popularity. It was produced in small amounts as a by-product of refining kerosene from crude oil, and while a few machines were designed to run on gas, it did not have many uses at the time. Around the turn of the century, the full potential of gasoline as a powerful fuel became more apparent, and more vehicles were starting to harness the power of this explosive hydrocarbon. The gasoline-powered automobile began to emerge and so did a demand for readily available gasoline that could be conveniently dispensed.

By 1905, Bowser had updated the pump design to comprise a metal container inside a wooden cabinet, and the device was marketed as the world’s first “Self-Measuring Gasoline Storage Pump” which would later come to be known as a “Filling Station.” These above-ground dispensers would be placed by the curb in front of stores to allow customers to fill up. But the demand for gasoline was still not very high, and the modern “gas station” as we know it today would not come about until a decade later.

Before the gas-dispensing operations could be scaled up, two major issues needed to be addressed concerning storing and pumping gasoline. The first thought was safety, and Bowser considered the drawbacks of storing gasoline above ground where it could be exposed to flames or sparks, being put at risk of combustion.

The other claim was more about quality, as gasoline stored above ground could potentially be exposed to air, evaporate, and allegedly lose its potency. During this time, a niche was created for self-contained gasoline storage and dispensing systems that automobile owners could have installed for convenient refueling in the comfort of their home garage. A storage system was needed that would be aesthetically appealing and that would keep gasoline safe and well-preserved. Thus, the idea of the underground gasoline storage tank was born.

Bowser & Co. increased the capacity of the metal storage container to 42 gallons and began installing these gasoline tanks underground at private residences, near the garage or along a driveway. Complete with associated piping and dispensing pump, they gave people the freedom to refuel their car from the convenience of their own homes. This type of residential set-up was referred to as an “Outfit”, and soon tanks of all sizes were being buried, from smaller “Pony Pumps” to tanks larger than a car.

At first, these outfits were marketed to wealthy individuals who could afford an automobile. In the early 1900s, it was far from a household item as not all of America was able to shell out $2,000-3,000 to purchase a new car. Accordingly, the gasoline dispensing outfits spared no expense to ensure that installations were custom fitted to the driver’s needs, and they were marketed toward those who could afford it. The systems were expensive to install, but the idea was that if someone could afford an automobile, they would have no trouble paying for the gasoline storage outfit.

By 1910, automobile offerings had expanded significantly, the cost of production had declined, the middle-class was granted access to more affordable models, and the second-hand market emerged as an additional avenue for purchasing an automobile. And so, gasoline storage outfits also began to appear in many different configurations, were made to be much more affordable, and could still fulfill the specific needs of the buyer. Competitors to Bowser emerged as well, and similar systems were manufactured and distributed by others, such as The Boyle Dayton Company, which started in Los Angeles around 1910. 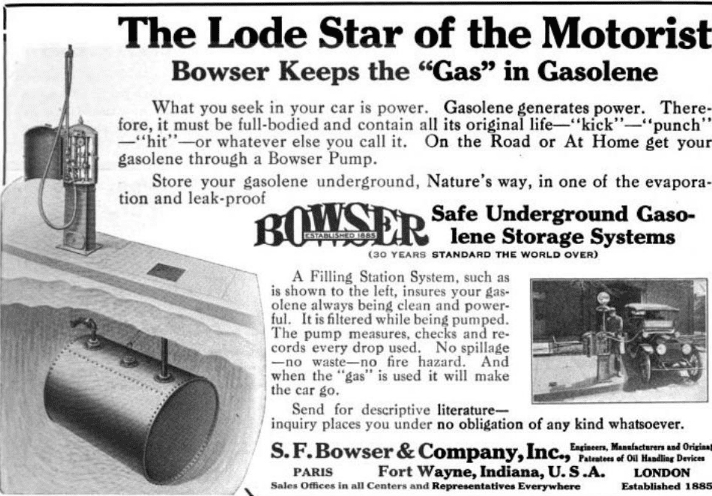 One feature that Bowser & Co. commonly advertised in the early 1900s was their capacity to install a gasoline delivery system tailored to fit their customers’ needs. In fact, they would create hundreds of unique outfits over the years to service factories, homes, and agricultural operations. One of the most popular designs during this time was the “Long Distance Outfit” which allowed the storage tank to be placed outside the footprint of the garage so that it could easily be refilled without bringing gasoline into the building. The pump would be placed inside the garage where it would be positioned to easily fill the gas tank of the automobile.

The “Portable Wheel Tank” was a mobile tank and dispensing hose that could be filled at the main pump inside the garage and then wheeled around to fill a car that might be parked in the street or somewhere else away from the main filling station. One example of the later-introduced and more affordable options is the “Direct Lift Outfit” which is a basic tank-and-pump outfit. The lack of any piping, hoses, or extendable pump handle helped to keep down the price of this outfit, which would be buried exactly where the gasoline was to be dispensed.

In 1913, William Meriam Burton patented a new method for refining oil into gasoline. Burton’s process, termed “thermal cracking”, efficiently broke down large petroleum molecules into smaller and more useful compounds like gasoline. And that same year, the appearance of the first drive-in gasoline fueling station began a trend of replacing the old curbside filling stations and residential outfits with the new full-service gas stations. This would allow Bowser Pumps to be installed all over the United States and expand their distribution worldwide to places like Europe and Australia. And the design continued to improve with new models appearing regularly.

By 1915 the Bowser “Red Sentry” boasted a hose and nozzle that could fill a gas tank directly (previously, gas would be dispensed into a separate container and then funneled into the gas tank). The gas station was quickly established as a road-side stop offering not only gasoline but also automotive supplies and some maintenance and repair services. There were finally enough cars on the roads to sustain such operations, and by 1920 there were as many as 15,000 gas stations across America, many of them offering Bowser Pumps such as the latest 1920s model called the “Chief Sentry.” This version featured an updated crank-operated pump, a protective dome that covered the pump when not in use, and a glass globe light that shined proudly at the top of the unit. 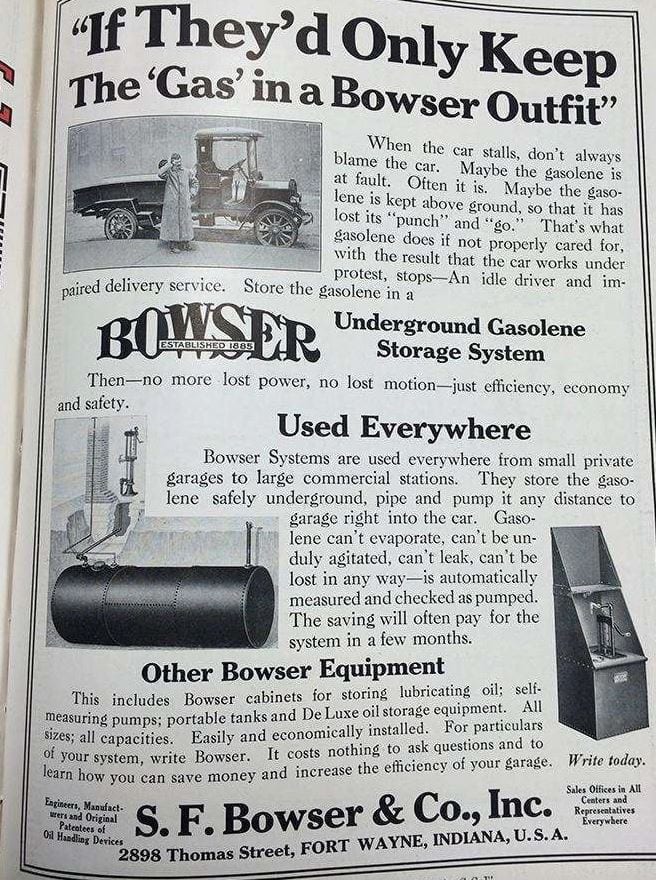 The Legacy of S.F. Bowser

S.F. Bowser made an undeniable contribution to the gasoline and automobile industry, and even American consumer history in general.  Bowser certainly played a major role in shaping the way we purchase and consume petroleum products. He passed away in 1938 but S.F. Bowser & Company continued to manufacture products bearing his name, at the original Ft. Wayne factory, until 1960. At that point, the brand was acquired by the Keene Pump Company, which phased out the Bowser name by 1970. Bowser tanks and associated pumps and piping can still be found buried on properties across the United States, and a description of the Bowser legacy would not be complete without addressing the environmental concerns that these underground storage tanks now present.

Historical underground storage tanks (USTs) that are left buried on a property represent a recognized environmental condition (REC) in association with the site. Any UST that is not still in use should be properly removed by following the UST abandonment process. The main reason for this is that the hazardous liquid stored inside is not secured by secondary containment (which is now the standard with modern UST installations). Furthermore, the single wall steel is subject to rust and corrosion, and the gasoline, oil, or other petroleum products stored inside the tank could be released into the surrounding soil and groundwater. During a real estate transaction or redevelopment process, a Phase 1 ESA should be conducted by an environmental professional as part of the due diligence process.

Regardless of the current land use, any historical use of the property as a gasoline service station will be revealed during this process. If there is evidence of past fueling activities on-site, a geophysical survey will be recommended to locate any subsurface anomalies that could be indicative of tanks or piping. If any USTs are found, they should be excavated and removed, a process that will require the oversight of a licensed professional geologist.