A methane mitigation plan is a comprehensive design of a system that eliminates the hazards of methane soil gas intrusion into buildings. For instance, new structures above historical oil fields, landfills, or soil contamination areas require a methane mitigation design to ensure the safety of occupants. Without a proper methane mitigation system, toxic vapors can migrate through foundations and affect indoor air quality. Consequently, these processes cause a lethal accumulation of methane gas indoors. And as a result, explosive and asphyxiation hazards endanger the occupants. Updated May 20, 2021.


When is a Methane Mitigation Plan Needed

Typically, these zones (or districts) are a result of regional petroleum fields, oil drilling sites, and natural tar surfacing, as well as landfill areas. These land-uses create an abundance of subsurface methane gas. And over time, the hazardous gas accumulates inside buildings and can concentrate to combustible levels. In fact, explosions and fires have occurred before, as a result of methane soil gas intrusion. 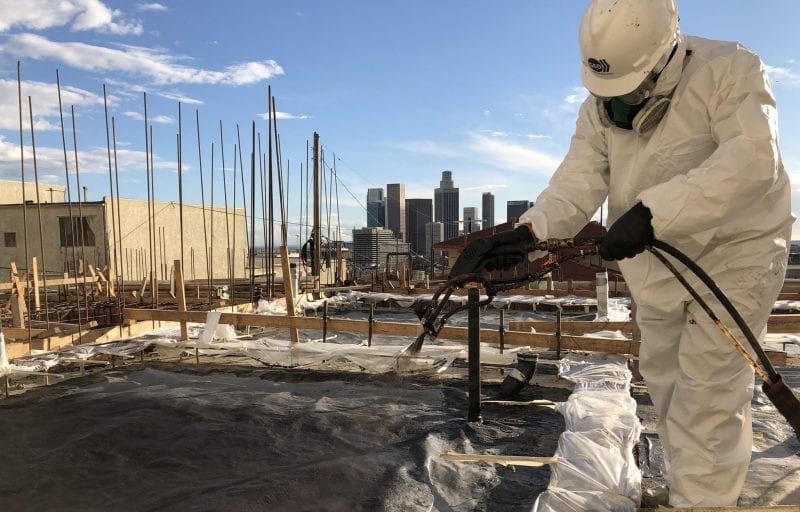 Methane (CH4) is the largest chemical compound of natural gas, in terms of volume. Other components are ethane (C2H6), propane (C3H8), isobutane (C4H10), and various other hydrocarbons. The term “natural gas” means combustible hydrocarbon gas originating from natural biological and geological processes. The formation of natural gas stems from the microbial and thermal decomposition of subsurface organic material.

The combustible gases resulting from microbial decomposition is “bio-genic gas.” This type of gas is most identifiable in landfill areas, swamp fields, marshes, and wetlands. On the other hand,  the explosive gas which comes from the thermal decomposition of organic matter underground is “petrogenic gas.” This is most common within oil fields and tar pit areas. Regardless of origin, both of these gases exist in the form of higher-pressure pockets underground. Most subsurface natural gas pockets warranting building vapor intrusion mitigation systems, are the result of organic thermal decomposition and petrogenic gas. 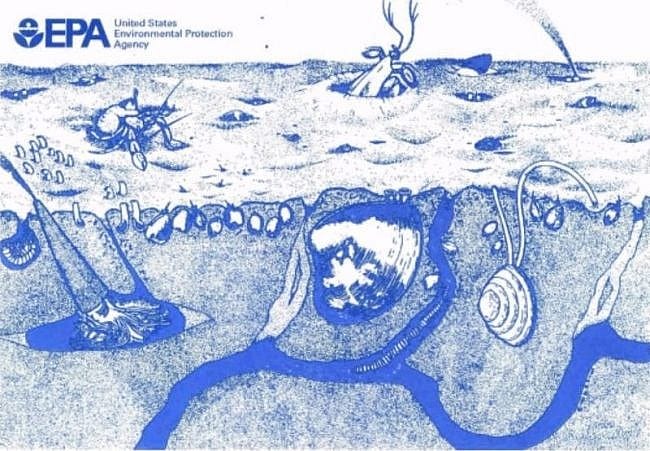 Methane gas is highly flammable. Moreover, it’s odorless and colorless. Thus, it’s presence within confining spaces isn’t easily detectable by humans. The subsurface soil gas does move through the soil. Theoretically, the gas takes the path of least resistance, and can build-up within pockets, at high pressure. Moreover, the flammable petrogenic gas has the tendency to rise to the surface and build-up within the lowest occupied spaces of commercial and residential developments. Each methane mitigation design intends to eliminate the combustibility factor of indoor air.

Urban development areas within proximity to oil fields, tar pits, swamplands, and landfills are known to have an abundance of petrogenic and biogenic gases underground. And the presence of these underground combustive gases poses a threat to the safety of commercial and residential building occupants. As a result, most government agencies have zoned such areas, as special soil gas hazard areas. Consequently, soil gas surveys, soil testing, and vapor intrusion mitigation standards apply when building.

The City of Los Angeles publishes a map of high-risk “Methane Zones” and “Methane Buffer Zones.” For properties in a Methane Zone or Buffer Zone, there is a requirement to comply with the Los Angeles Department of Building and Safety (LADBS). Site-specific design parameters for a methane mitigation plan are based on the data from a methane soil gas test. There are various LADBS mitigation design levels. Accordingly, the mitigation system requirements increase with each level. As a result, the plans can include specialized ventilation systems that are either “Passive” or “Active.”

Generally, the design parameters of a methane mitigation plan are a reflection of the results of a methane soil gas test. Using modern drilling methods, geologists follow a strict set of standards to install soil gas probes. Each probe set includes vapor implants at various depths below the ground surface. And each soil gas probe includes a special valve which then applies to collect a representative vapor sample. Each sample set represents air from the pore spaces of soil underground, per the vapor implant depth. A proper methane assessment requires numerous samples from various depths and locations.

Vapor intrusion is the process by which toxic soil vapors migrate through the subsurface, penetrate building foundations, and intrude into living spaces. In fact, in most cases, it’s the subterranean levels that have the highest risk of vapor intrusion, as well as the first level aboveground. A methane mitigation plan specifically aims to prevent toxic vapor intrusion processes from occurring. Similarly, a vapor mitigation system ventilates the existing ambient air, such that the indoor air quality remains optimal for occupants.

The identification of vapor intrusion hazards typically arises during a methane soil gas survey, or Phase 2 Environmental Site Assessment. These processes involve drilling and sampling to observe the presence of toxins directly within the subsurface. And using site-specific data, professional geologists can calculate the risk of vapor intrusion by the use of vapor intrusion models. Alternatively, when buildings are already in place, environmental professionals can perform indoor air quality testing procedures to determine whether an intrusion exists or not.

A methane test provisionally screens the subsurface for methane soil gas, per the standards of the LADBS. In fact, the soil gas survey process provides design input data for a methane mitigation system engineer. There are five primary methane design levels in the City of Los Angeles. And the testing and design parameters are in general accordance with Division 71 of the Los Angeles Building Code. Most other building departments, fire departments, and environmental agencies across the nation implement similar codes, which base on the LADBS standards.

In any case, the methane mitigation construction process must fully comply with local building code requirements. In this area of work, most jurisdictions have standards that are similar to the City of Los Angeles codes. Nonetheless, the designer of any methane mitigation plan needs to be in constant communication with the construction team, as well as the methane deputy inspectors.

The design methane pressure value is the highest earth-pressure measurement from any soil gas probe in a methane test. The design methane pressure also plays a significant role in the determination of a site-specific methane mitigation level. For example, a Level 3 site with pressure readings above 2.0 inches of water (units of pressure) requires additional methane mitigation components, comparing to that of a site with less than 1.0 inches of water.

A complete passive mitigation system includes a series of perforated horizontal ventilation pipes within a network of gravel blankets and an impervious membrane, as well as vertical ventilation risers. Passive ventilation systems are complex engineering projects which intend to block and remove hazardous gas from underneath buildings. A passive system relies on the natural rising characteristics of hydrocarbons and volatile organic compounds (in the vapor phase), in order to capture the accumulations underground. Furthermore, the system is strategically set-up to naturally direct the gas upwards and around the structure, exhausting it into the atmosphere. Passive systems are essential in every methane mitigation design. 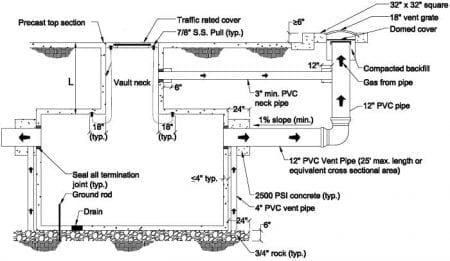 At a minimum, a Passive Mitigation System includes a network of horizontal ventilation pipes underneath the building foundation. Engineers custom-design each system to operate efficiently, and optimally. Part of the plan includes specifications on piping frequencies, piping diameters, perforation widths, gravel types, thickness, and more. Gravel and sand blankets are also overlain by a special VOC-and-hydrocarbon-impervious membrane. And a series of vertical ventilation risers connecting with the horizontal pipes allow the captured methane to migrate around the building, as opposed to into the building. 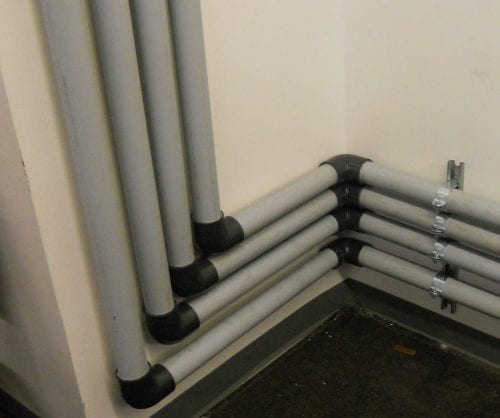 Another crucial component of any methane mitigation plan is the special vapor barrier that stops the soil gas from invading the lowest occupied space. Underlying the slab (and also the surrounding walls of a subterranean foundation) is a gas barrier that is physically and chemically manufactured to be impervious to volatile organic compounds and hydrocarbon gases. The methane mitigation design and installation of this barrier are highly critical and require special training and certification to do so. In fact, each methane barrier installation requires on-site inspection and approval by the regulatory building department, fire department, and manufacturer. The ramification of any error in this process can be catastrophic. 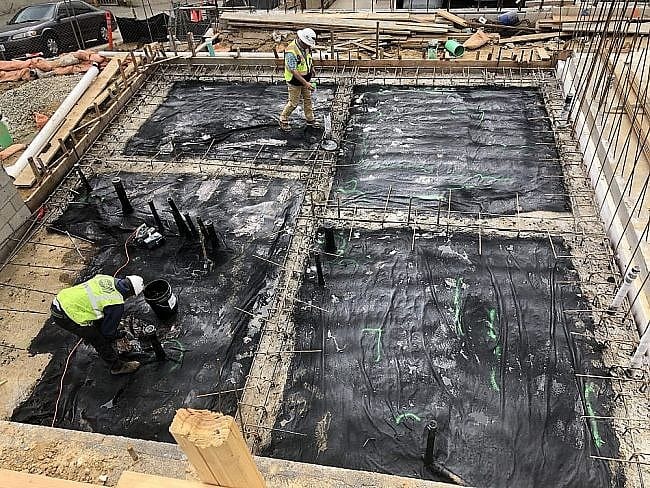 A methane barrier is a sheet-like material that actually stops the migration of any sub-slab methane gas into building spaces. The methane barrier itself is the most vital component of any methane mitigation process and requires critical installation, inspection, and leak-testing by experts with manufacturer certification. In fact, manufacturers will not provide a product warranty for consumers, unless the methane barrier is installed by an authorized contractor. The methane mitigation barrier typically exists underneath concrete floor slabs and behind subterranean concrete retaining walls. And the perforated piping and gravel blankets are typically underneath the impervious methane membrane. Prior to pouring any concrete, a final smoke leak test is performed under the oversight of a city inspector. Upon the sealing of any leak detections, the inspector grants final certification and approval, and the prime contractors may commence with slab pouring. 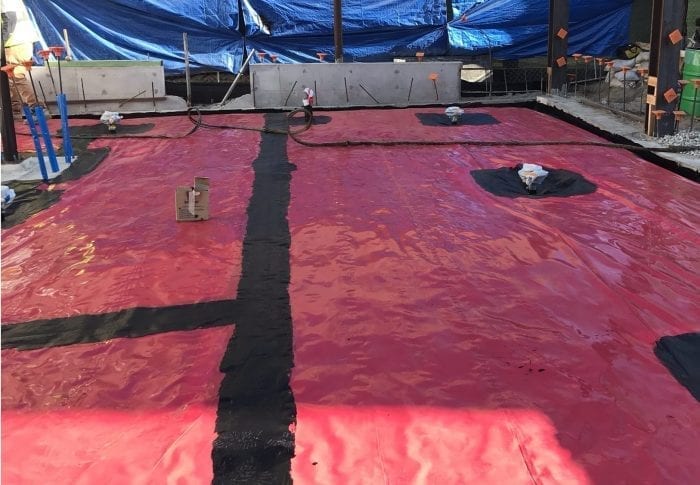 An Active Mitigation System includes a network of sub-slab and ambient air methane gas sensors that are hooked up to a main detection system and control panel. Additionally, sub-slab pipes are mechanically enhanced for the proposes of ventilating the subsurface of a building within a methane zone. In the same way, and a mechanical ambient air ventilation system exists to reduce combustibility indoors. In a nutshell, when concentrations of methane gas approach the lower explosive limit, the sub-slab and ambient air ventilation systems instantly activate to mitigate the hazard of combustion.

A control panel and operating system processes the data from the sensors and accordingly activates the ventilation units. Nonetheless, the control panel will periodically self-activate the ventilation system in order to maintain a proper air exchange rate indoors and at the sub-slab. To illustrate, the control panel is the brains of the mitigation system and facilitates a communication platform amongst all of its components. Moreover, the control panel system triggers an alarm system to warn occupants about peaking levels of methane soil gas, or system malfunctions. Alarm systems are engineered to be noticeable by all occupants of a building and are audible, as well as visual.

Miscellaneous components include trench dams, as well as the use of special conduits and cable-seal fittings. Trench dams block the intrusion of methane gas through subsurface utility line trenches. For instance, sewer laterals or water mains. Additionally, the use of specialized conduit and cable-seals prevent the seepage of hazardous gas from within utility lines. Each methane mitigation plan provides details for trench dams and conduit seals.

Dewatering and Waterproofing in Methane Mitigation

Groundwater levels fluctuate throughout time. And variations are based on local environmental impacts, climatology, and nearby human activity. When the bottom of the subterranean structure supersedes the depths of groundwater, the methane mitigation system process and overall lowest occupied space of a building are at risk of flooding and failure. As a result, the infiltration of groundwater, as well as hazardous methane soil gas, compromises the structure. Moreover, the hydro-static pressures of surrounding groundwater can also compromise the structural integrity of the foundation. Thus, design adjustments need to be made.

When an impervious membrane and sub-slab ventilation piping network are within proximate depths to historically highest groundwater levels, there becomes a strict requirement for a dewatering system. A dewatering system lowers the groundwater table to a safer elevation with respect to a subterranean space and methane mitigation system. Additionally, special waterproofing applications prevent groundwater from passing through a methane vapor barrier. Ultimately, dewatering and waterproofing systems are designed in accordance with methane mitigation systems when necessary.

The geologists and engineers at Geo Forward are experienced with the latest methane mitigation design standards. Geo Forward specializes in designing these systems for commercial and residential projects. Moreover, the Geo Forward team is an expert in barrier applications for subterranean parking garages, underground vaults, basements, and more. Call (888) 930-6604 for more information about a methane mitigation plan.