A geophysical survey is a subsurface investigation that uses electromagnetic technology and radar to locate and identify underground anomalies. For instance, a geophysical survey company can delineate the extent of underground storage tanks (USTs) and backfill excavations without any digging or drilling. These scientists use a combination of electromagnetic induction, magnetometry, and ground-penetrating radar (GPR), along with utility locators and line tracing devices to study the subsurface. And data from a geophysical survey can help geologists determine the extent of recognizable environmental conditions underground. As a result, the findings help optimize soil contamination testing reports. In fact, many Phase 2 Environmental Site Assessments include a geophysical survey. Updated April 6, 2021. 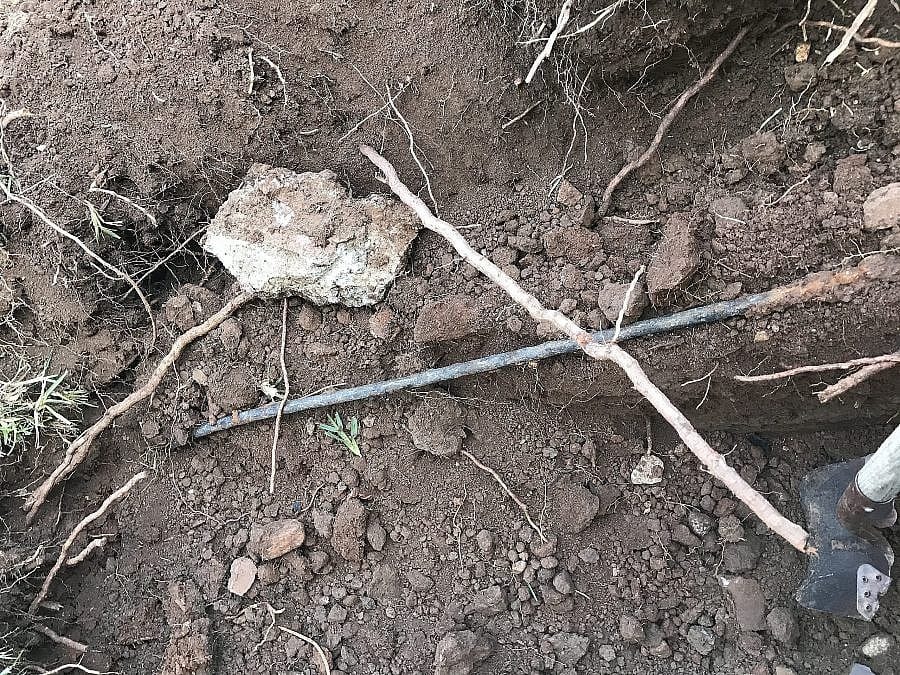 Most states have a licensing board program for geologists, engineers, and surveyors, and geophysicists. These are also the agencies that typically oversee the practices of geophysical survey companies. For instance, the California Board for Professional Geologists administers a professional license exam and program for geophysicists. This government agency, along with other boards, also oversees the business and professions code in this field of work.

A geophysical survey company works side-by-side with geologists to discover subsurface conditions. For instance, during a Phase 1 Environmental Site Assessment, a geophysical survey may be recommended by the environmental professional to locate a historical underground fuel tank on a property. Whereas in a Phase 2 Subsurface Investigation, the survey provides an approximate footprint of a tank or pipeline, for drilling clearance and nominal sample depth selection. 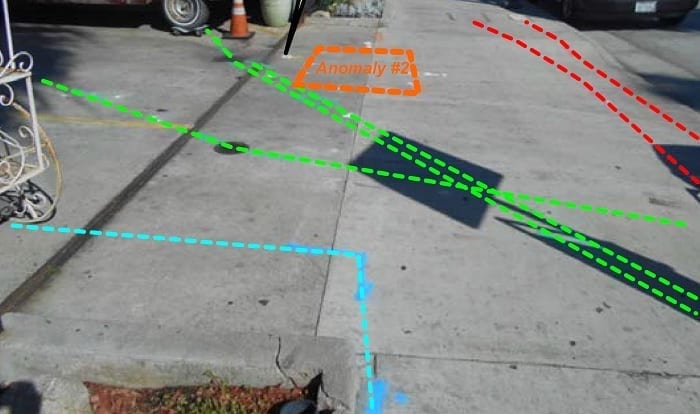 During a geophysical survey, scientists use ground-penetrating radar (GPR) to beam energy into the ground from a transducer. This occurs in the form of electromagnetic waves that bounce off the subsurface anomalies, where there is an electrical contrast. The energy reflects back into the transducer, and the ground-penetrating radar (GPR) records the reflection. In fact, this process performs in real-time, as the geophysical survey company technician traverses across the ground surface.

In some cases, there is a higher amplitude of the return energy. And as a result, there is a greater electrical contrast. The velocity that the waves travel is based on the material properties of the subsurface materials (for example, soils, metal tanks, concrete septic tanks, etc.). The rates of the traveling waves assist geophysical survey company technicians to determine the characteristics of the underlying anomaly. For instance, depth, material, shape, etc. In fact, the depth of a wave penetration, as well as the image resolution, are a function of the electrical conductivity of subsurface materials, and the dielectric constant.

A geophysical survey company will often use a magnetic gradiometer. This device has two magnetic sensors that pass over the ground surface. This instrument produces a low-volume high-pitch sound in order to signal a low-frequency reading. This occurs when the device isn’t nearby a magnetic object. In the same way, the high-pitch sound increases in pitch and volume, when the device passes over a metallic object such as steel or iron. This signifies the presence of a high magnetic gradient. For the geophysical survey company, this frequency is a function of the gradient between two sensory probes.

The EM instrument is a high-per metal detector. A geophysical survey company will also frequently use an EM instrument. This is a high-resolution and time-domain device that comprises of a transmitter generating a pulsing magnetic field. The device coils must have a charge to produce the magnetic field, as it induces currents in other nearby conductive anomalies. This system applies best by geophysical survey technicians, for identifying buried conductive objects.

Using this tool, a geophysical survey company can facilitate an accurate location of underground metallic targets. A response can be essentially independent of ground electrical conductivity, by recording the measurements at longer intervals, relatively speaking, after the primary pulse (for instance: measured in milliseconds). The decay of the currents following the pulse is measurable by these receiver coils. And the decay-rate is measurable from two coils. As a result of the engineered coil arrangement, a definable response becomes apparent directly over a conductive object.

An M-Scope device produces data by energizing the ground. In fact, this device produces an alternating current (AC) magnetic field in a transmitting coil. And if any conducting materials exist within the AC magnetic field zone of influence, the currents flow into the conductors. The size, depth, material, and shape of the subsurface anomaly play a role in the M-scope data. There is also a secondary field, which is a function of conductivity, and directly relates to these properties. Sensors detect a secondary magnetic field, and output response in the form of “ground conductivity values.” This device is also more sensitive to conductive subsurface anomalies which are below the instrument, rather than to the side.

The geophysical survey process uses a line locator to detect live electric lines and conduits. This applies most to pipelines and other subsurface utility lines. If a riser or day-lighting substance is available, a transmitter can connect directly to the object. This allows for a control signal to travel along with the unit. For instance: applying a charge to a conductor, pipe or conduit, and tracing it across the property. And if a day-lighting section of the subsurface line isn’t available, a transmitter can impress an input signal on the utility for the same result. Similarly, the receiver device tunes to the signal and traces the signal across the property in real-time.

A sewer line video survey is a supplemental service to a geophysical survey. Both tasks can be part of an environmental site assessment to inspect the quality and condition of underground pipes containing waste. The objective of this joint service is to identify the precise location of an underground pipeline and determine where any leaks might occur. Each leaking point is a recognized environmental condition and warrants drilling and testing. 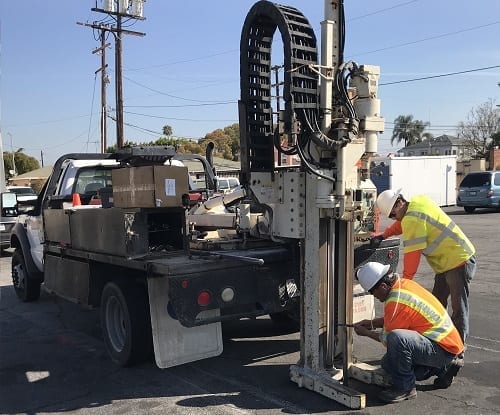 All geophysical survey company interpretations take place in real-time. This means the data occurs as the survey progresses. At each moment a theory becomes definitive, the geophysical survey company technician marks the ground surface with chalk spray paint. As a result, the findings and conclusions of such data are typically a demonstration of the markings on the ground surface, made by the technician.

Moreover, a geophysical survey company report is additionally prepared after the field investigation. These reports include records of the markings, photographs, tabular data, field notes, and data, as well as screenshots of the ground-penetrating radar imagery.

In general, the following color-code system applies for most geophysical survey companies across the nation:

A geophysical survey company cannot make guarantees regarding the accuracy of its findings and interpretations. However, the limitations of a geophysical investigation are a best-practice approach to determining subsurface conditions. There are a variety of potential obstructions to this process, most of which are above ground, underground, or on the ground surface. Almost all job sites have some conditions which cause instruments not to perform optimally. As a result, the detection of subsurface anomalies and buried objects are not guarantee-able in every circumstance. And if one or more geophysical survey devices are ineffective, the quality of the survey will reportedly have data gaps.

Some above-ground features can interfere with the performance of these geophysical survey devices. For example, a wrought iron fence can interfere with the magnetic fields of electromagnetic devices and impair the ability to identify subsurface metallic anomalies. And other above-ground metallic devices produce conflicting magnetic fields and signals. For example, power lines and electrical transformers. Moreover, above-ground obstructions can also block a traverse pathway and physically prevent devices from collecting data where there is a need.

On the other hand, some obstructions can occur from under the area in which the geophysical survey technician is directly traversing. For instance, a subsurface re-bar reinforcing concrete slab can also throw off data results. Similarly, metallic ground covers, manholes or changes in floor materials can also result in the same effect. In the same way, large-shallow objects shielding deeper-smaller targets, and inaccessible and numerous risers, clean-outs, or valve boxes also degrade the geophysical survey. Additionally, highly conductive underground soil conditions, can limit ground-penetrating radar penetration. Lastly, soils with higher concentrations of metal particles can limit the detentions of non-metallic anomalies. 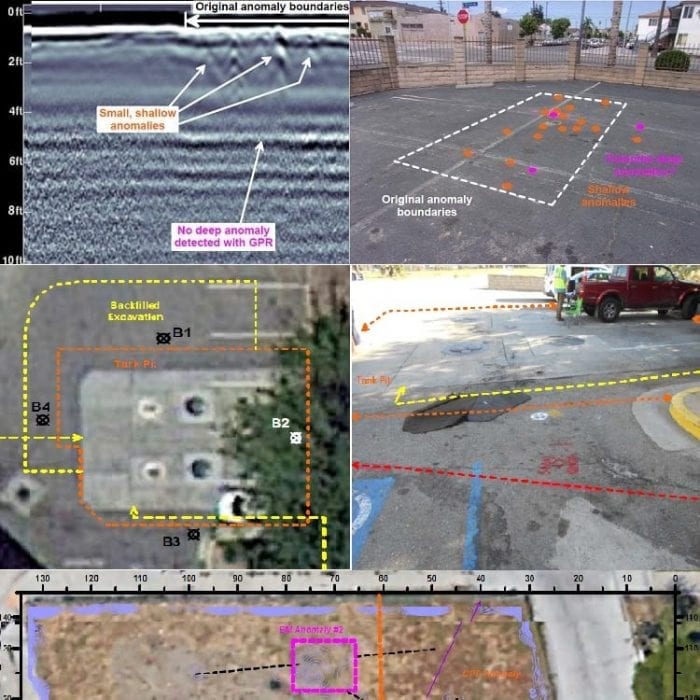 Airing on the side of caution and following health and safety procedures is the best policy for excavation and drilling projects. Thus, most geophysical survey companies encourage users to notify the local Underground Service Alert (USA) program, in addition to performing a geophysical survey. Furthermore, hand-auguring and air-knifing or vacuum extraction methods are also best-practice methods to avoid underground utility line damage. Although costly, this practice significantly limits damage to underground utilities.

For more information about geophysical surveying services, please call (888) 930-6604 for a free consultation.