Take a walk in Los Angeles, and you will likely not think twice about the multitude of utility manways and vaults underlying the aging concrete beneath your feet. The City of Angels has undergone rebuilding and redevelopment several times since its inception and continues to evolve to this day. Many of the metal lids and covers are seen on the street. Modernly, they are not in use and are long forgotten. However, some may warrant a closer inspection, particularly if you are concerned about the environmental condition of a property. 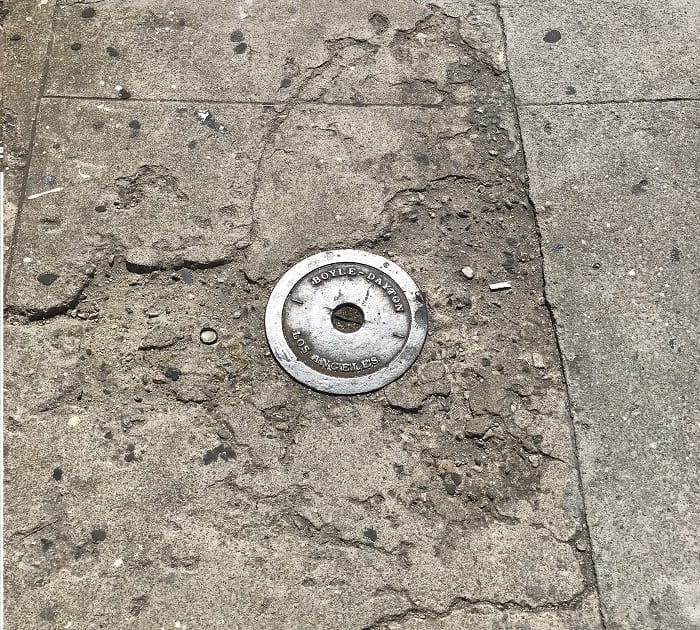 Non-descript circular lids are seen in sidewalks across the city, with the words “Boyle Dayton Los Angeles” on them. These metal discs bear the name of a long-forgotten gasoline dispenser manufacturing company. The Boyle Dayton Company was a huge part of the gasoline service station industry and American industrial history. Boyle Dayton Los Angeles essentially introduced factors of convenience, quality and style into their parts, much like Apple and Tesla do today. As a result, the Boyle Dayton Company history is a feature subject in automobile and petroleum museums across the country.

The world’s first fueling station was built in Wiesloch, Germany in 1888 to refill the tank of the first automobile. This station was reportedly set up at the city pharmacy during Bertha Benz’s inaugural trip from Mannheim to Pfrozheim. In the same way, pharmacies all over began selling gasoline on the side. The first fueling station made solely to sell gasoline was built in St. Louis, Missouri in 1905. With the growing rate of automobile manufacturing and ownership, curbside fuel stations became of higher demand. Consequently, new curbside gasoline stations began to appear across the United States.

The first generations of curbside fuel stations were quickly followed by full-service auto fueling and repair stations. The idea for the full service station was to create a one-stop-shop, where travelers can repair and fuel-up their cars while using the restroom, enjoying a meal and picking up road maps and tourist brochures. Consequently, the curbside fueling stations became obsolete, and the standalone gas pumps and USTs were put out of commission. According to a review of historical fire insurance maps, these replacements began as early as the 1930s. However, fueling was not a regulated service at the time. Additionally, there had been a lack of environmental impact understanding during the early dates of decommissioning. Thus many curbside station owners chose to remove the above-ground accessories, leaving the underground components in place.

The first drive-up station opened in Pittsburgh, Pennsylvania in 1913. In fact, prior to drive-up stations, gasoline was typically purchasable at general or hardware stores. Early gas stations were powered by kerosene adapter pumps. These pumps would require hand-cranking, and could accurately measure and dispense fuel. Earliest pump models include a metal tank with wooden cabinet, and have a hand-operation suction pump. These early systems were capable of holding approximately 40-gallons of fuel at a time. Moreover, the early systems did not entail direct fueling into and automobile. Instead, the system would require a technician to dispense the fuel into a secondary container, and manually transfer it into the vehicle’s gas tank. As a result, most gasoline stations chose to store the fuel in the dispensers themselves, in effort to save time.

The Boyle Dayton Company was born in Los Angeles in approximately 1910 and manufactured a gasoline pump called the “Boyco” by 1920. The company continued operations through 1929, until agreeing to a corporate acquisition by the Wayne Pump Company. Boyle Dayton Los Angeles had a reputation for making stylish pumps that accurately measure oil and gasoline, as well as underground storage tanks, lubrication pumps, and air compressors. Pumps by the Boyle Dayton Company included bolting assemblies to the ground and connections to product pipes leading to underground storage tanks directly underground. Additionally, Boyle Dayton secured a patent for an air-powered technology which increases the speed an automobile could be fueled. As a result of the innovative design, there had been a significant increase in the popularity of their pumps and sales. Consequently, installations of their pumps began spreading radially outward from their home base in Los Angeles.

Although the Boyle Dayton Company was in business for a brief period of time, signs of the former gas pump and tank manufacturer exist all throughout Los Angeles. For instance, their legacy still displays in the form of small utility covers within the city walkways, and in petroleum museums.

In the urban areas across America, underground storage tanks (USTs) became popular for both aesthetic and functional purposes. Early tanks were typically single-wall steel sheets, and under 1,000 gallons by volume. Boyle Dayton did advertise a sturdy manufacturing process, with galvanized steel, riveting and soldering. Moreover, the tanks and pumps had glossy paint jobs, much like cars the at the time. And according to an Automobile Trader listing for Boyle Dayton Los Angeles Company, the pumps and dispensers were capable of an easy quick connection to a variety of tanks (any capacity).

These tanks typically comprise of three openings. One serves a purpose for ventilation piping. Another is for a filling port. And in the third place, a suction line, leading directly to the pump. Additionally, the fill pipe appears to include a strainer to prevent debris from flowing inside the tank.

An average set up of the original Boyle-Dayton pumps may include two curbside pumps on a sidewalk. Each pump would be directly connecting to a stand-alone underground storage tank. Typically, the underground storage tanks underlay the sidewalk as well. Furthermore, additional lines were likely to extend from the UST, toward an air compressor for pump operational purposes. Fill ports are typically flush with the ground surface, and directly lead to the top of the UST for easy deliveries.

Since the original Boyle Dayton Los Angeles Company pumps were located within city sidewalks, the remnant features remain in place for over a century. Especially in areas that have not undergone road-widening and redevelopment. For example, a former curbside fueling station operational in 1915, may not have sold gasoline for decades. However, there may still be an existing fuel storage tanks (UST), as well as ventilation and product lines within the sidewalk. And although these items are technically off-site, the owner may still be held responsible for any environmental issues arising from the original curbside gasoline station.

In the City of Los Angeles, municipal substructure maps often denote the locations of known underground tanks in city sidewalks. Additionally to gasoline tanks in association with former curbside stations, many city buildings historically maintain heating fuel tanks in the street. Underground storage tanks in association with former gasoline fueling activities will often still have piping and access ports to the former fill pipe and former pump locations. The “Boyle Dayton Los Angeles” utility covers in age-old sidewalks indicate the prior locations of these features. Often, these underground storage tanks are unnoticeable due to having no record of the substructure or former use of the property and the lack of familiarity with the former gasoline pump manufacturer brand.

Remaining underground storage tank features represent an environmental concern. This is due mostly to the lack of corrosion protection and secondary containment. Despite advertisements to the contrary, the single-wall steel piping and tanks with riveted sheet metal are prone to damage and rust. Consequently, hazardous contamination compounds include gasoline, diesel, fuel, oil and metals such as lead. As a result, these substances may impact the surrounding soil, soil vapor, and groundwater.

If a property undergoes redevelopment or selling, a Phase I Environmental Site Assessment is the prudent course of due diligence. Environmental due diligence reports entail professionals which may identify the potential underground fuel tanks and piping. If evidence of former fueling activities are noticeable, there would be a recommendation to perform a geophysical survey. Furthermore, the existing underground storage tanks can undergo a removal and official abandonment process, under the proper permits and environmental protocol. Typically, this includes sampling oversight by a professional geologist.