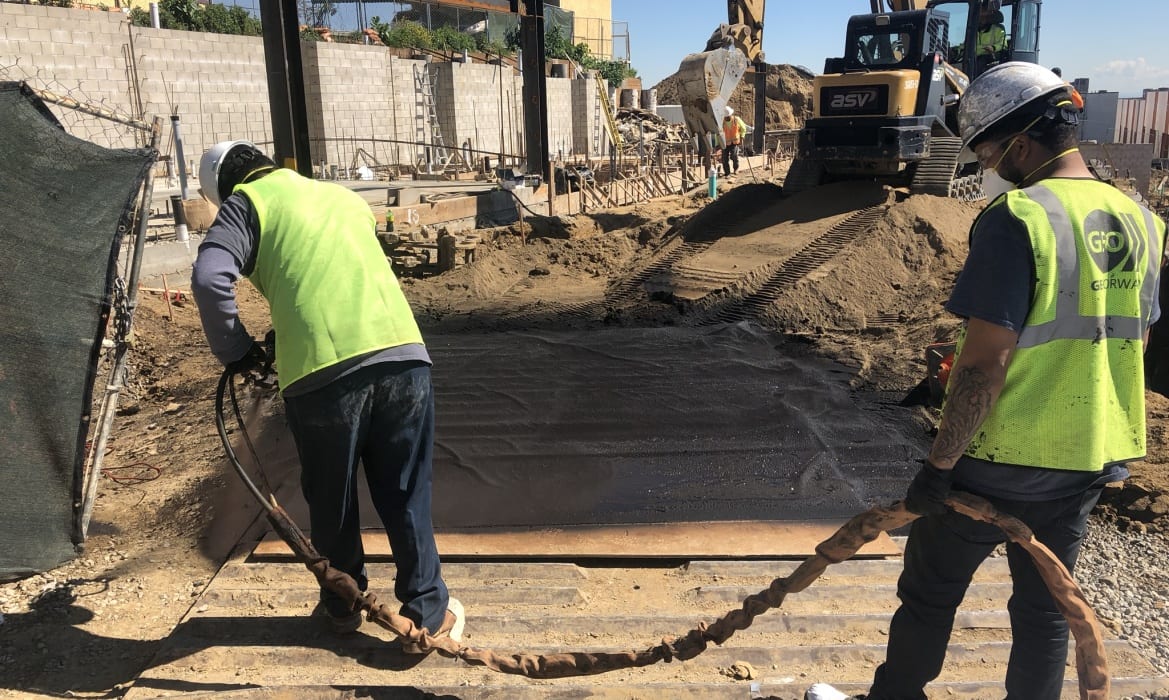 What is Vapor Intrusion?

Vapor Intrusion is the process by which underground vapors rise to the surface and enter a structure through cracks in the foundation, floors, and walls.  These upward-migrating gasses may be the result of chemicals that enter the ground as a liquid but return to the surface as a vapor, or, they may originate underground from natural sources.  Regardless of the source, the result is that the indoor air becomes hazardous to human health as a result of the vapor accumulation inside the building.  It is possible to identify vapor intrusion risks during Environmental Site Assessments and confirm them via Indoor Air Quality Testing.  The problem can then be properly addressed through Mitigation and Remediation, ensuring the building meets and maintains safety standards for occupants, employees, and visitors.

Chemicals that can readily evaporate into a gaseous form are known as “volatile compounds”. This type of chemical is the primary concern regarding vapor intrusion, as non-volatile compounds cannot easily form vapors. Of course, a wide range of volatility exists among compounds, and some chemicals that will evaporate more slowly are called “semi-volatile”. But when a volatile chemical is released into the ground, there is a high risk of that chemical reappearing aboveground as a vapor. Once the chemicals are in the ground and groundwater, the process of volatilization begins under normal conditions and temperatures.

There is no catalyst needed to convert the liquid chemicals to vapors, and no way to stop the process from happening without removing the source of contamination from the site. Unless there is a vapor barrier in place, it is quite easy for these underground gasses to enter a building’s lower level through small cracks in the foundation, or even pass directly through the porous concrete comprising the base of the structure.  Additional channels for vapor entry include spaces around utility lines, sumps, wall/floor joints, and cracks in lower-level walls.

The contaminants may be released into the subsurface unintentionally even if a good-faith effort is being made to follow best practices. For example, unknown damage to operational equipment or pipes may result in frequent, small releases of a chemical into the ground. Or, a larger accidental release may occur if a large containment unit such as an underground storage tank (UST) is damaged or outdated. There is also the risk that a previous owner of the site was intentionally disregarding environmental regulations, and even directly discharging waste products into the ground or nearby surface water.

Furthermore, the intruding vapor may be a natural part of the subsurface composition. Vapors such as methane and radon will migrate into overlying structures simply because they exist naturally beneath the structure and their natural tendency is to rise in a generally vertical trend, following the pathway of natural geological subsurface features.

One example of chemical contamination leading to vapor intrusion is the widely used dry-cleaning solvent, perchloroethylene (PCE), a notorious volatile compound that can cause human health problems as can its breakdown products, tetrachloroethylene (TCE) and vinyl chloride.  Other common volatile compounds include petroleum hydrocarbons such as diesel and gasoline, and related products like benzene, toluene, ethylene, xylenes (BTEX).  However, the simplest of all hydrocarbons is one that occurs naturally underground and is one of the major sources of vapor intrusion risks: Methane.

Although this gas is not known to be toxic to humans by inhalation, it presents serious negative consequences for other reasons. For one, if methane concentrations become too high inside a building, it displaces the available oxygen and can lead to asphyxiation. And the other risk is that high levels of methane pose a major explosion hazard. The lower explosive limit (LEL) for methane is around 50,000 parts per million (ppm) and at this concentration inside a building, the gas has been known to combust and engulf the containing structure in flames. In fact, this phenomenon has been a significant concern in Los Angeles since at least the 1980s.

One common soil vapor of concern is methane gas. Methane soil vapor has become a growing concern in most areas of Southern California, such as Los Angeles and Orange County. In fact, subsurface methane is usually in association with petroleum fields and landfills. Soil vapor as methane can migrate underground, and accumulate inside buildings over time.

Methane Soil Gas Tests are designed to screen the soil under properties for combustible hydrocarbon content. Based on the results of a methane soil test, a Methane Mitigation System can be designed to prevent its intrusion into buildings.

Soil Vapor Testing for Other Chemicals

Depending on the historical land use of a property, a soil vapor test can be optimized to screen for volatile organic compounds (also known as VOCs). This covers a variety of commonly used industrial solvents and petroleum-based products.

A Phase 2 Environmental Investigation typically incorporates shallow soil vapor testing for VOCs and hydrocarbons. Soil vapor data is used to determine whether contamination exists in the subsurface and whether a potential human health risk exists.

A Human Health Risk Assessment is a scientific assessment of the theoretical health risk to occupants or users of a property posed by underlying contamination. Soil vapor testing data is used for the risk assessment calculation. Guidelines for this assessment are from the American Society for Testing and Materials (ASTM), the California EPA, the U.S. EPA, and the Department of Toxic Substances Control (DTSC). A Human Health Risk Assessment (also known as an HHRA) also provides a screening-level analysis of the potential indoor air quality from vapor intrusion.

A major fire in the Fairfax Area of Los Angeles in 1985 is known to have been caused by large amounts of methane vapor intrusion through foundational cracks. And methane-related structure fires along with the discovery of large pockets of underground methane have led to legal requirements during construction activities in Los Angeles, California, via City Ordinance Number 175790, passed in 2004. This document establishes Methane Zones and Methane Buffer Zones, requires testing for methane prior to building, and outlines the mandatory mitigative actions that must be implemented based on the findings of the pre-construction soil gas investigation.

Once these vapors begin to accumulate inside the building, the indoor air chemical concentration will continue to increase unless mitigative action is taken. Increasing indoor air circulation and opening windows for ventilation will help as a short-term removal action, but the source of contamination must ultimately be addressed.

There are two main ways to ensure safety and regulatory compliance of a site plagued by vapor intrusion. The first is to remove the source of contamination, if possible. This method of soil and groundwater remediation aims to physically remove chemicals from the subsurface or alter them by means of a chemical reaction creating harmless products as a result.

The second option is to install a vapor barrier beneath the foundation of the building during construction. The former generally applies to sites contaminated by chemical releases. The latter is usually more appropriate for methane intrusion, because the source of contamination is naturally occurring, widespread, and cannot be removed or altered.

Until as recently as the 1990s, vapor intrusion was a relatively low-profile and under-studied pathway of human exposure to harmful chemicals at contaminated sites. However, by the early 2000s, this problem began to gain more attention and regulatory agencies began to publish more comprehensive recommendations for conducting vapor intrusion investigations. One example of this early guidance is the 2007 document from the Interstate Technology & Regulatory Council (ITRC), Vapor Intrusion Pathway: A Practical Guideline. Resources like this are an important tool for environmental consultants conducting investigations that need to comply with regulatory oversight.

Vapor intrusion is an environmental condition that must be addressed, but need not halt the development or utilization of a property altogether. Properly identified vapor intrusion hazards can be efficiently mitigated by an experienced engineer, contractor, or geologist. If development is taking place at a contaminated site or methane hazard zone, then soil, soil gas, and/or groundwater samples must first be obtained through a subsurface investigation or soil-gas survey. If subsurface vapors have already been identified on-site, then the next step is an Indoor Air Quality Investigation to confirm whether the intrusion is taking place. Whatever stage a property is in, a licensed professional environmental consultant can keep a project on-schedule, remain compliant with all environmental and building code regulations, and most importantly, help keep a building safe for all residents, employees, and visitors.

For more information about soil vapor intrusion studies and soil vapor testing, call (888) 930-6604 to speak with a professional geologist.

The United States Geological Survey – “What is Methane and Why is it a Safety Concern?”