For an amazing geologic and scenic nature experience while 4×4 off-roading and camping, Geo Forward highly recommends the Coyote Flat 4×4 trail to Funnel Lake in California’s Inyo National Forest. This 4×4 Jeep trail offers a different visual experience during each season of the year. And at about 10,300 feet above mean sea level, overnight stays at the Funnel Lake campsites will require cold-weather gear year-round. 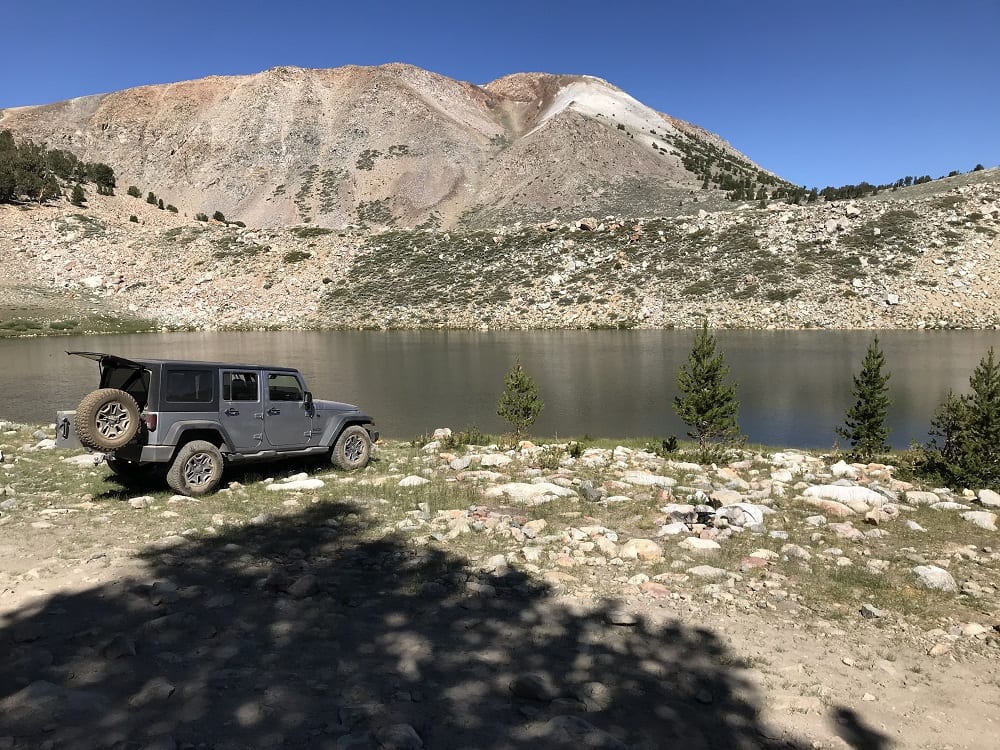 The overall off-road journey to Funnel Lake via the Coyote Flat trail is an incredible experience. The drive is nothing you’d want to rush. And it comprises a variety of sections that are technical, intermediate, and easy-going. The average off-roading timeframe (depending on the mode of transport) can range between 1.75 to 3 hours. And Geo Forward’s rating for the difficulty of the Coyote Flats off-roading experience is 3.5 out of 5.

Please refer to the custom maps below which demonstrate an overview of the Coyote Flat 4×4 jeep trail. Also, please note that by clicking the map-images below, one can access an interactive map of the trail via Google Maps.

To be clear, there are a variety of trail options that can lead to Funnel Lake, once you’re in the Inyo National Forest area. But this article covers the most common and preferred paths. 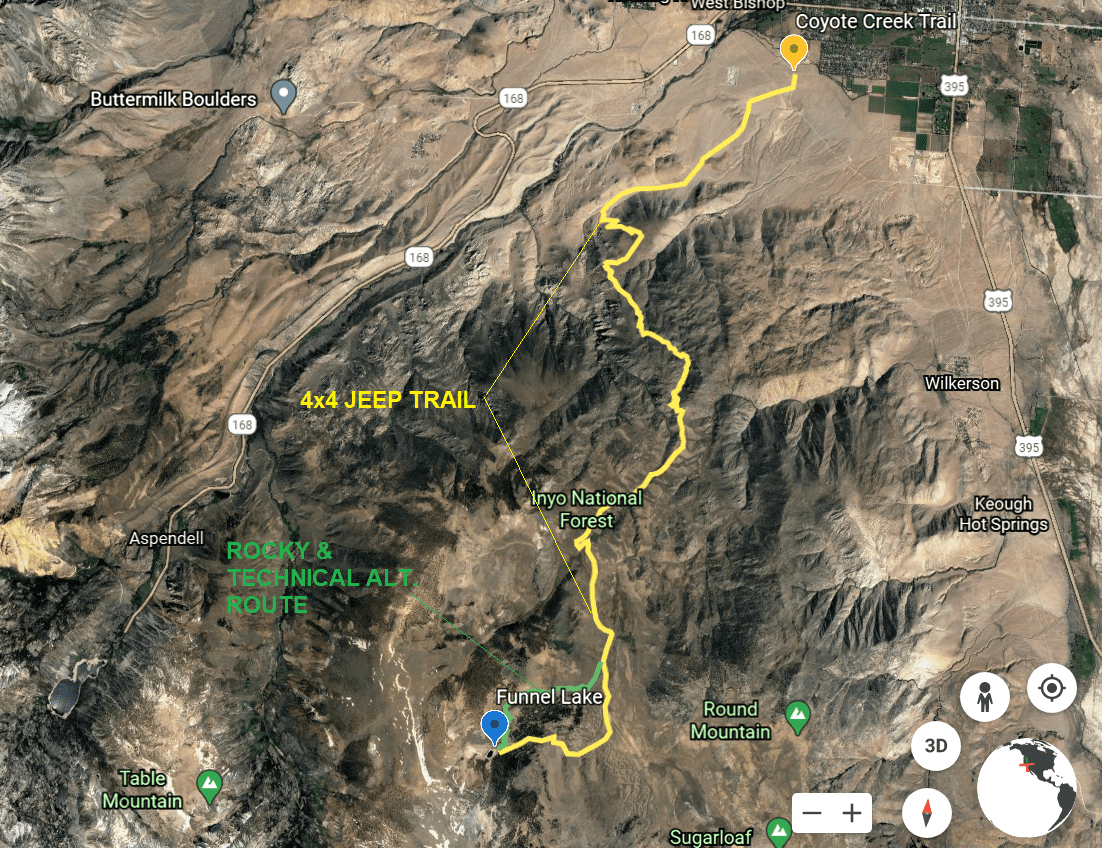 Initially, there’s one main trail to climb to a higher elevation from the trailhead, and that is Coyote Valley Road. This portion of the trail (see the gray line below) is intermediate in the difficulty scale and comprises two river crossings. The first river-crossing is through Coyote Creek, and the second is through the West Fork of Coyote Creek. And in between the two river crossings, there is the first of two forks in the road (the Coyote Creek or Coyote Flat Trail Fork). Upon completing approximately 80% of the 4×4 drive towards Funnel Lake, there is the second of two forks in the road, which separates an intermediate 4×4 path and a rocky technical 4×4 path to the campsite.

This article provides detailed information, maps, pictures, and video clips about these landmarks, and more. 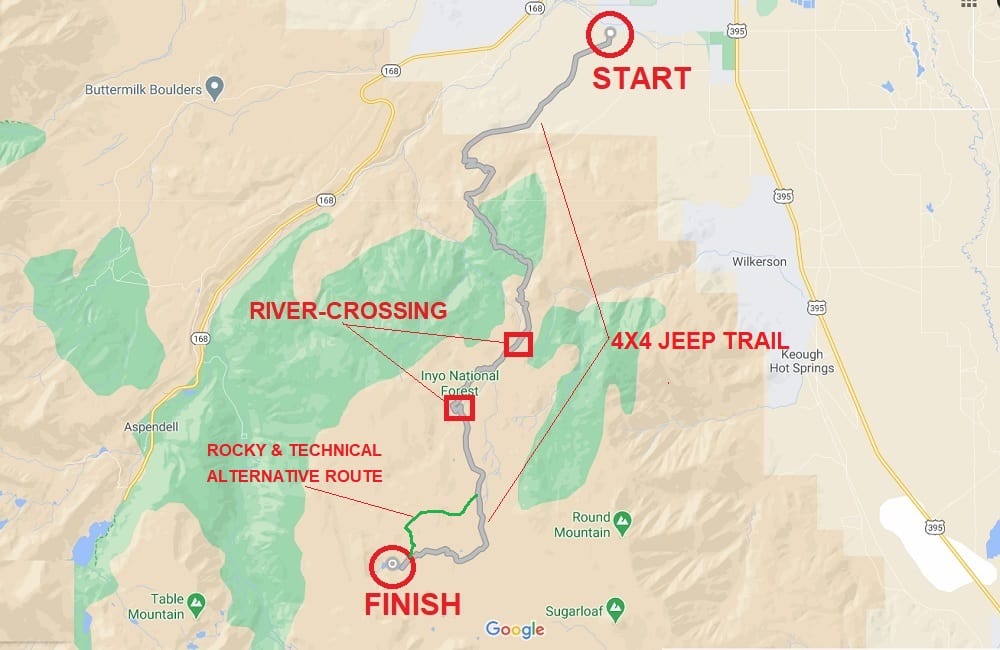 To summarize the general information and maps above, please reference the short video below, demonstrating the Coyote Flat off-road trail to Funnel Lake using Google Earth.

The start of this 4×4 off-roading adventure is at the three-way intersection of Coyote Valley Road, Reata Road, and Underwood Lane, in the City of Bishop, California (GPS Coordinates 37°20’47.8″N 118°26’19.6″W). When driving on the westbound portion of Underwood Lane (from Bishop), you’ll see a dirt road on your lefthand side, trending south. That’s Coyote Creek Valley Road, which has some safe areas off to the side for temporarily parking to deflate tires and strap-up gear. 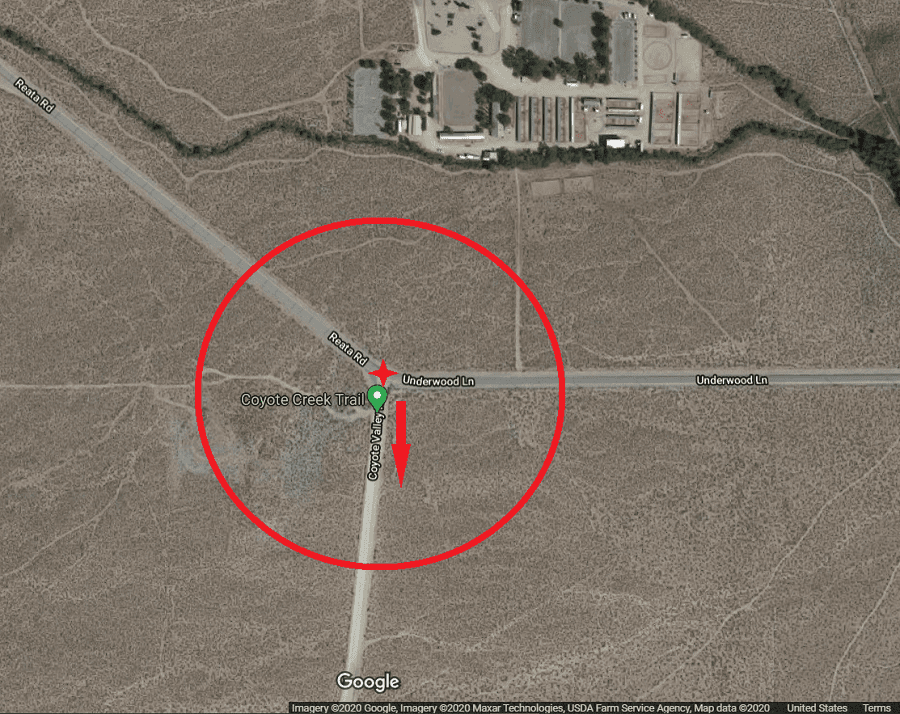 Driving southbound at the early stages of Coyote Valley Road may not require activating four-wheel drive on your off-road vehicle. The initial 15 to 20 minutes are relatively flat, as the trail leads to the foothills of the initial climb. Nonetheless, there are some sections for this road that comprise loose and deep sands. Thus, engaging four-wheel drive is still recommended for erring on the side of caution.

Driving Southbound on Coyote Valley Road, from the Trailhead in Bishop, CA

3. The Initial Climb Up the Mountains

Upon arriving at the foothills of the mountain, there is one last turn-about off to the right-hand side. If 4×4 has not been activated by this point, this would be the best place to pull aside and engage four-wheel drive. Additionally, please note that beyond this point, Geo Forward recommends only attempting the Coyote Flat trail with a vehicle that has a proper height and ground clearance, four-wheel drive, slightly deflated tires, and a spare wheel and tire. 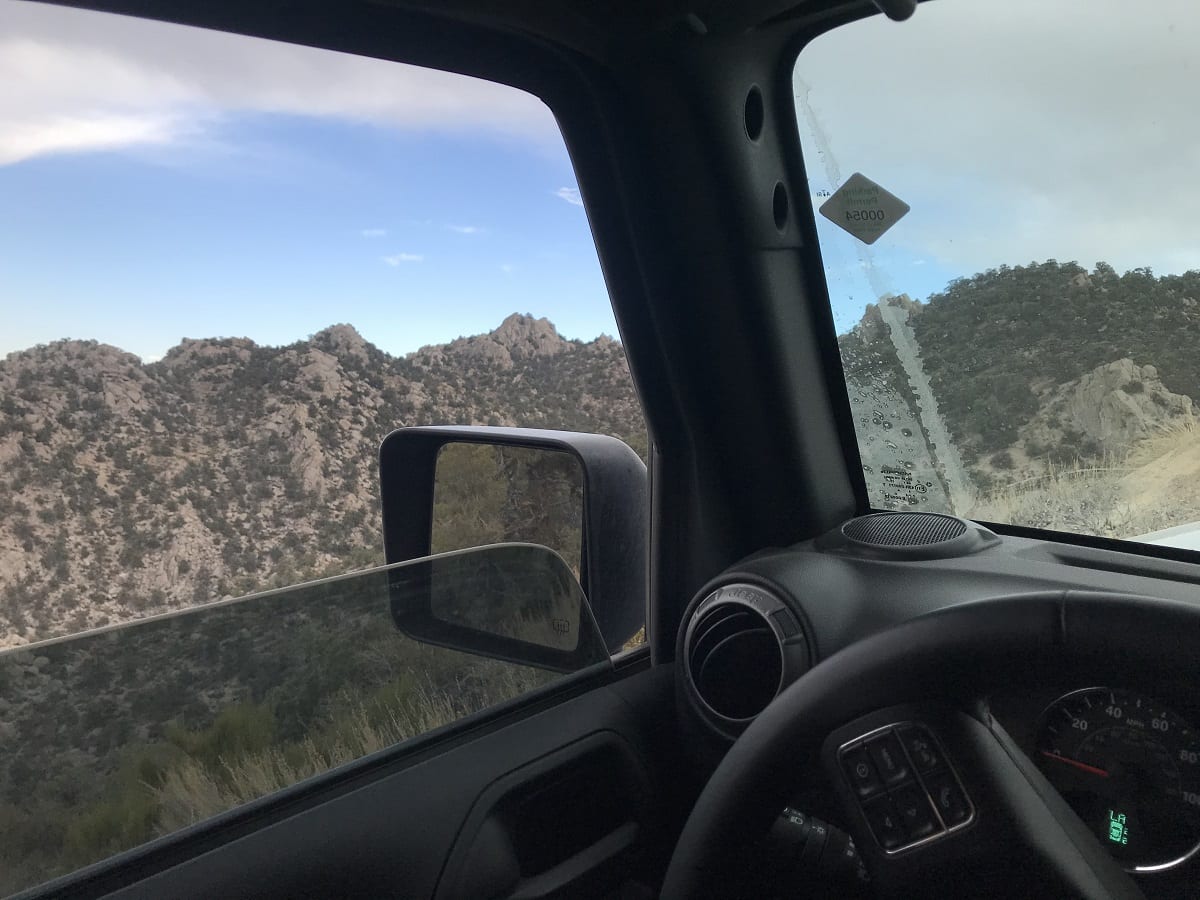 The upward climb is relatively steep and slightly technical. And there are a series of switch-backs elevating the road, with numerous boulders road voids, and alternating terrains along the way. In fact, you can expect to go from about 5,000 to 9,000 feet above mean sea level within about 30 to 40 minutes of driving the section of the trail. Nonetheless, the drive is incredibly fun, and the scenery is magnificent. Especially looking downwards in the valleys along both sides of Coyote Valley Road. 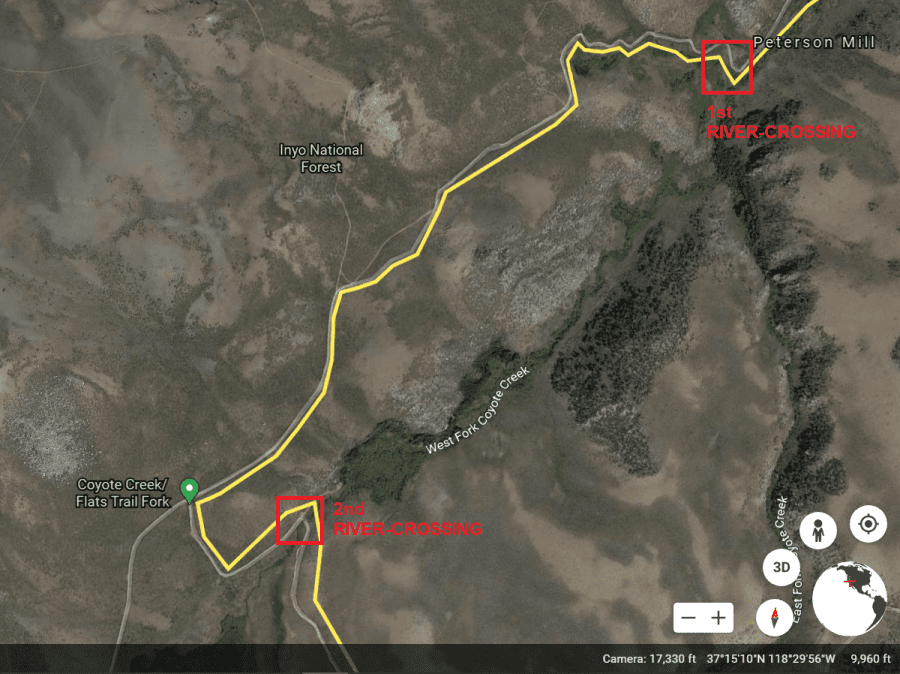 As a matter of environmental compliance and nature conservation, Geo Forward and the National Parks Services recommends driving slowly through rivers. Slower 4×4 driving through the creeks preserves the natural grade of the river system’s sediments and thus, the ecosystem. Moreover, Geo Forward advises all drivers to be sure their vehicles are not releasing toxic contaminants into the streams upon vehicular contact with the flowing water.

The Environmental Professionals at Geo Forward advise all off-road vehicle owners to thoroughly inspect their engine bays and undercarriages prior to crossing rivers. Moreover, it is advised that supplemental fuel storage tanks, such as NATO Jerricans, are properly harnessed to the vehicle at a height above the line of water. This is because any release of automotive oil, fluid, or fuel has the potential to migrate through the river system, and further pollute the soil and groundwater of the environment.

The first of two significant forks in the road is the “Coyote Creek / Coyote Flats Trail Fork.” This area includes posted signage and is anticipated about 60% of the way towards Funnel Lake. 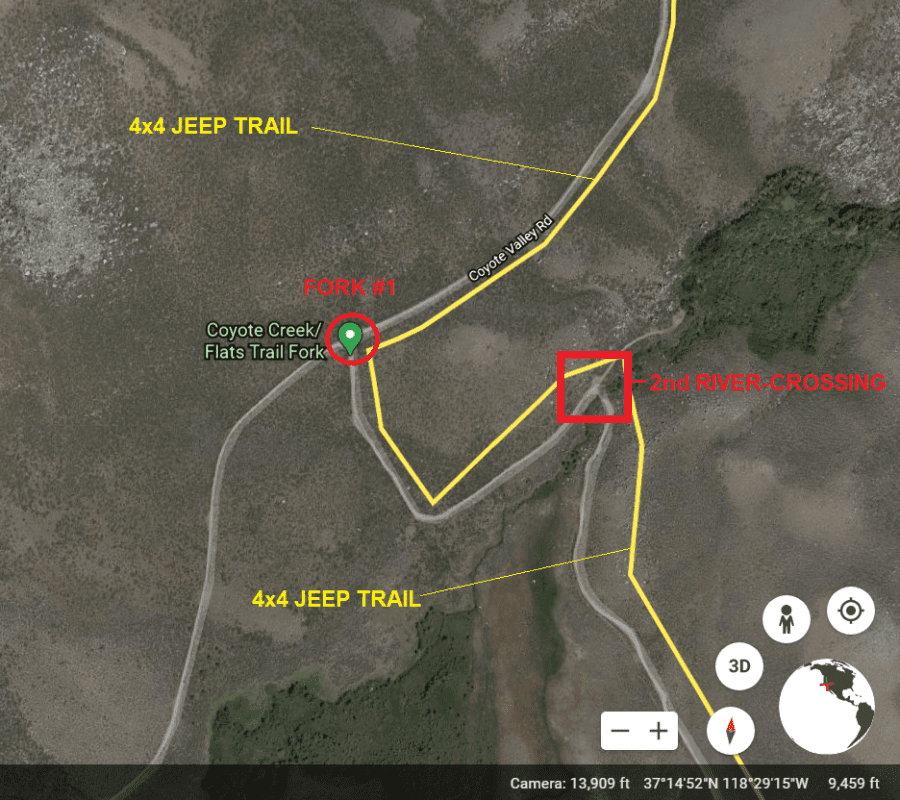 6. Second Fork in the Road

The second of two significant forks in the road has no signage and is anticipated about 80% of the way towards Funnel Lake. Nonetheless, both options of this fork will result in the camping site destination at Funnel Lake. 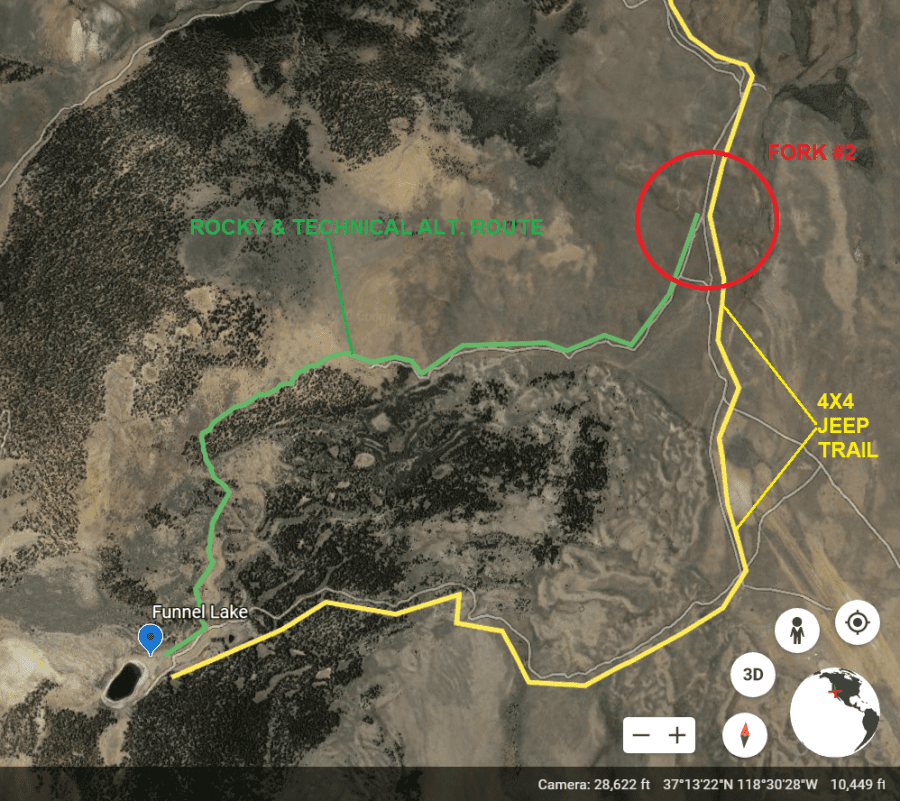 Although the trail goes on, the nominal destination of this 4×4 off-road adventure is Funnel Lake (GPS Coordinates 37°11’59.7″N 118°30’40.3″W). The overall camping site areas are around the southern and eastern sides of Funnel Lake. Moreover, there are additional camping space available surrounding a smaller body of water located slightly east of Funnel Lake. 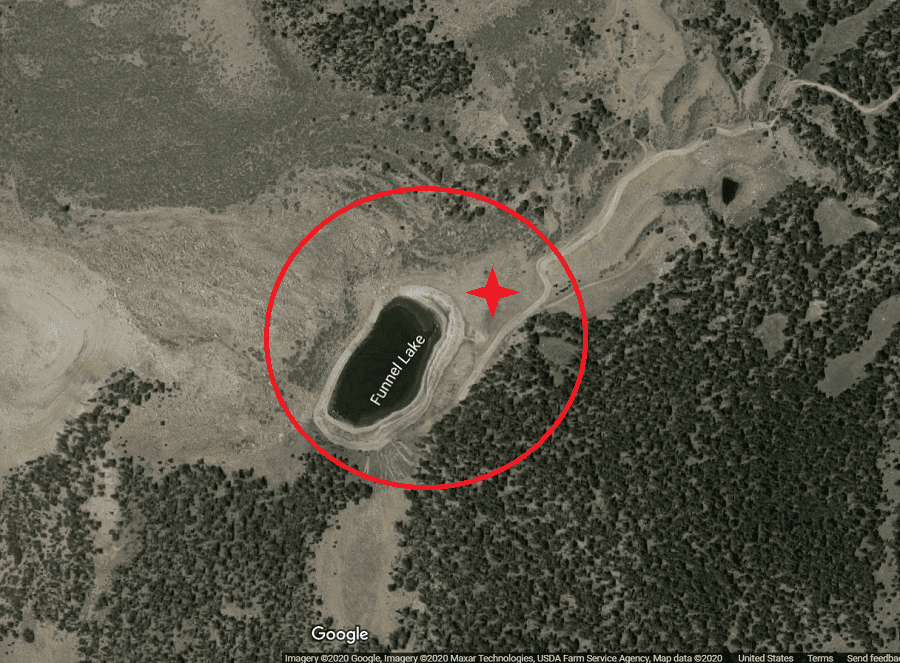 The campsites at Funnel Lake are widespread. There is a beautiful view from any location, whether you’re set-up in front of the lake, or further away. There are no lines, lanes, borders, or boundaries. So all campers must find their own location, and be mindful of the other campers around them. As of the year 2020, campfires are allowable under a proper campfire permit.

How Can I get a Campfire Permit in California?

Civilians can apply for a California campfire permit at any government forest service office. For example, the United States Department of Agriculture Forest Service (USDA Forest Service), the Bureau of Land Management, or the California Department of Forestry and Fire Protection (Cal Fire). Permits are enforced by the local forest rangers. In fact, a forest ranger may browse the site on a nightly basis to check for campfire permits. 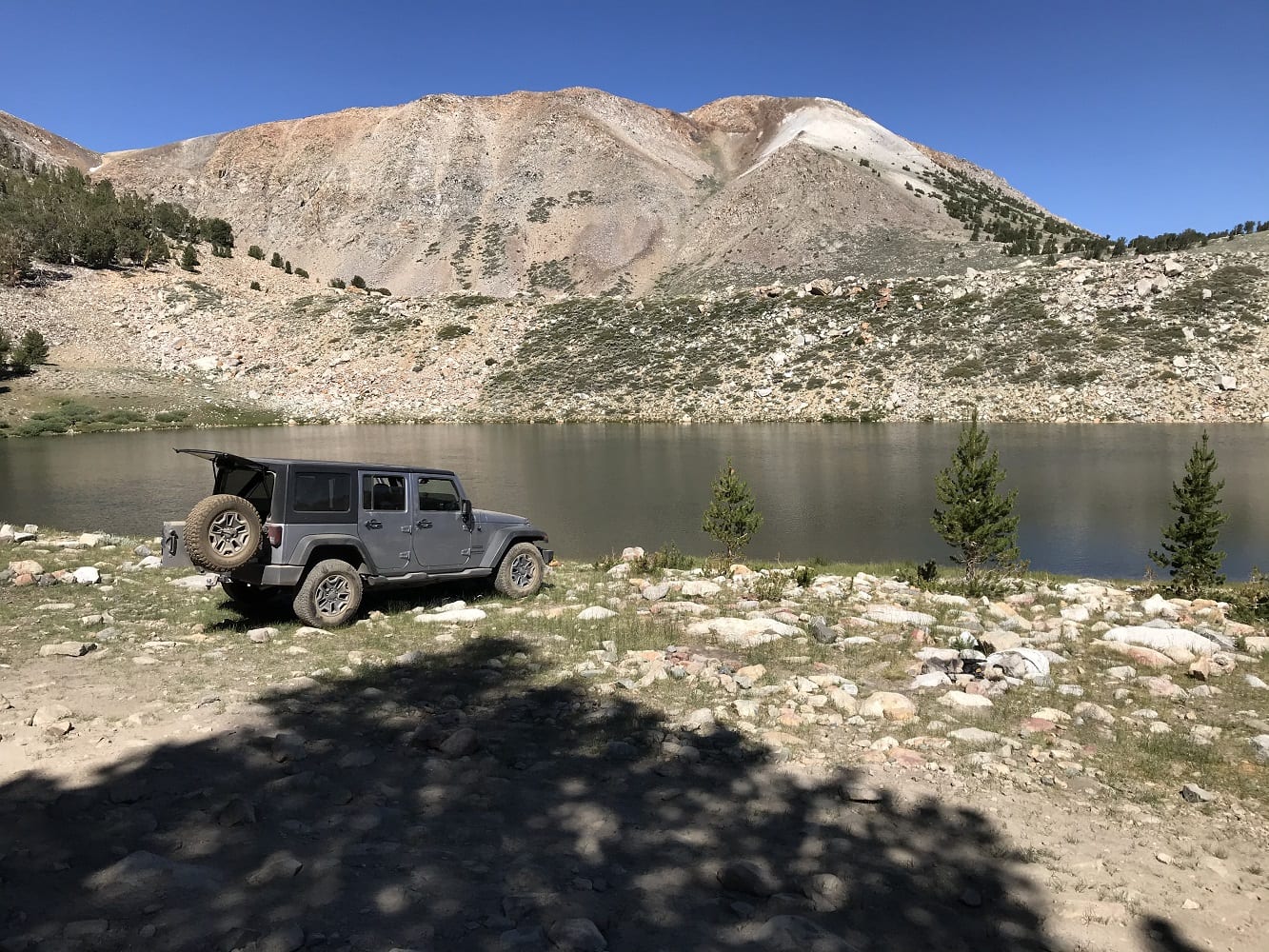 The Coyote Flat and Funnel Lake areas are within the Inyo National Forest. And the geology of Inyo National Forest comprises two, roughly parallel stretches of mountainous land in eastern-central California. The mountains generally trend north-to-south and extend towards the California-Nevada border. In fact, the prominent geological features contained within this forest area includes part of the Sierra Nevada (on the western side), and the Inyo Mountains and the White Mountains (to the east). The two areas are separable by a valley through which runs the Owens River, from Mono Lake south to Owens Lake.

Geological Range of the Sierra Nevadas

The portion of the Sierra Nevada that lies within Inyo National Forest is part of a much larger Sierra Nevada Range that exists between the Central Valley of California (to the west), and the Great Basin (to the east). To illustrate, the Sierra Nevada extends south to the San-Andreas Fault and the Mojave Desert, and as far north as Tahoe and Plumas National Forests. In fact, it terminates near Lake Almanor just south of Lassen Volcanic National Park.

Perhaps the most notable geological feature of the entire Inyo National Park area is Mount Whitney, which can be found at the western edge of Inyo National Forest along the border of Sequoia National Park. This peak rises to an impressive 14,494 feet above mean sea level, making it the tallest peak in the Sierra Nevada, and the highest point in the lower 48 states.

The mountains of the Inyo National Forest region are comprised of plutonic igneous rocks categorized as the “Sierra Nevada batholiths.” Geologists using uranium-lead radioisotope dating conclude these rocks range between 82 and 125 million years old, placing them as mid-Early to mid-Late Cretaceous era formations on the geologic time scale. Moreover, other volcanic igneous rock outcrops, such as basalts, andesites, and rhyolites exist within the mountain areas of Cayote Flat and Funnel Lake. And amongst them are a variety of sedimentary rock formations comprising Holocene-aged alluvium and colluvium. 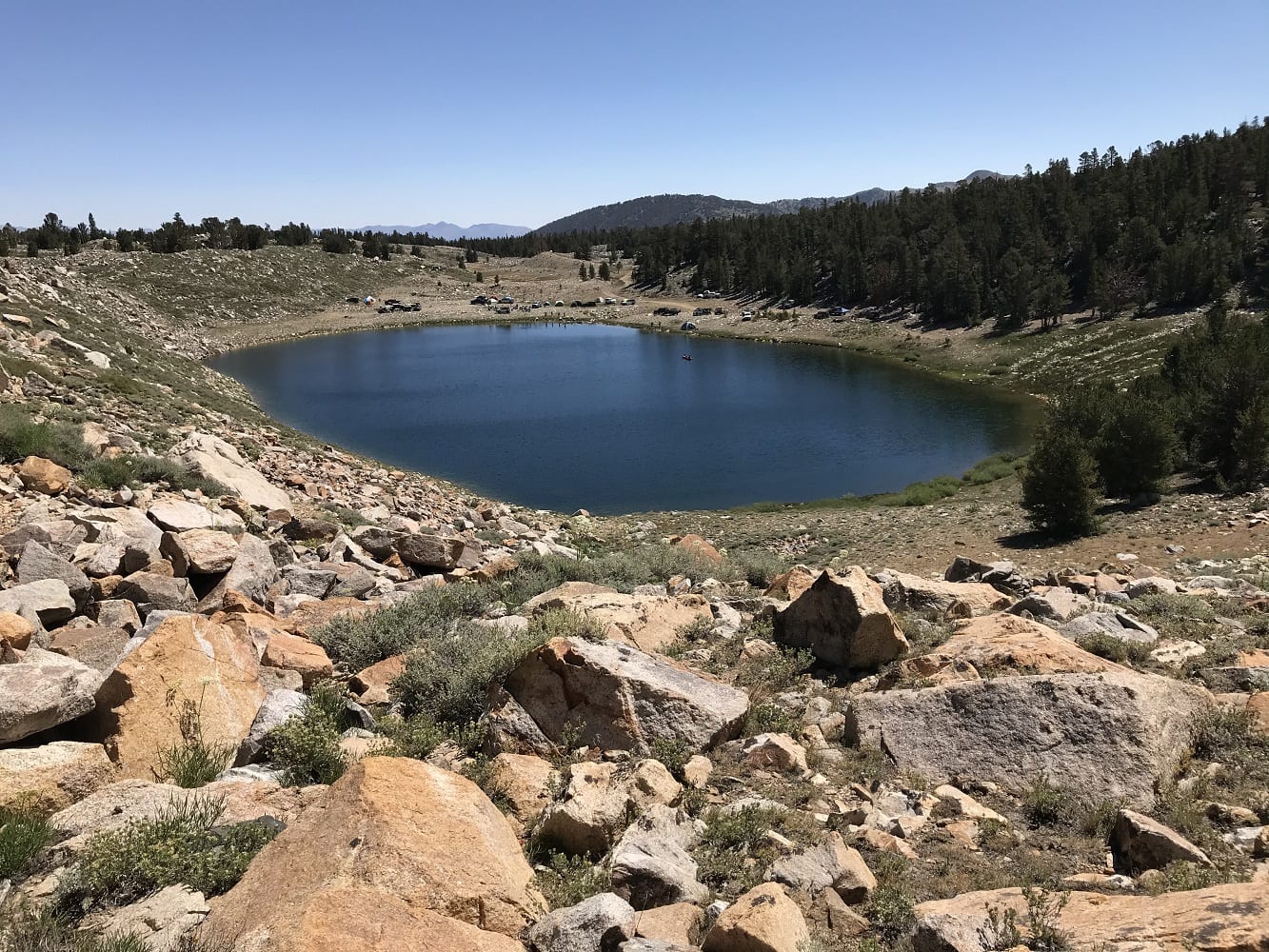 Are there Fish in Funnel Lake

Naturally, there does not seem to be any fish in Funnel Lake. Although artificial fish stocking may occur from time to time. Nonetheless, many campers attempt fishing at this location each time they visit. To be clear, the Geo Forward team has not observed any freshwater lake fish species at any time in Funnel Lake.

Although Funnel Lake is a freshwater lake body, it does not comprise an active influent nor effluent steam on a year-round basis. And the water is understood to be seasonal snowmelt, trickled-down from the higher elevations. For this reason, Funnel Lake is not reasonably presumed to naturally accommodate the migration and spawning of common freshwater fish species.

How Difficult is Off-Roading at Coyote Flat?

Overall, Geo Forward rates the Coyote Flat (or Coyote Valley Road) off-road 4×4 jeep trail a “3.5” out of “5” on the difficulty scale. Some areas and alternative route options vary. For instance, the “rocky and technical” alternative itself brings up the trail’s average. Whereas most other portions of the trail are easier.

Coyote Flat and the Funnel Lake campsite are California’s gems for you to enjoy the way you like. But just in case you need a few pointers, the following are Geo Forward’s general recommendations: