This post summarizes the geology of Long Beach, California. But some geological and hydrogeological data may be incomplete or pending review. Nonetheless, students, geologists, and earth scientists are welcome to openly use, critique, and contribute information. To do so, please refer to the comments function below. Ultimately, all post data is subject to review by a professional geologist. Updated May 13, 2022.

The study area lies within the Long Beach Quadrangle of the United States Geological Survey (USGS) 7.5-minute series topographic map. And the general region comprises a series of hillsides and flatlands, that range from 350 feet above mean sea level (AMSL) at the hills, to 5 feet AMSL at the shoreline. Furthermore, the flatland areas appear to mostly slope southerly, towards the San Pedro Bay shoreline. 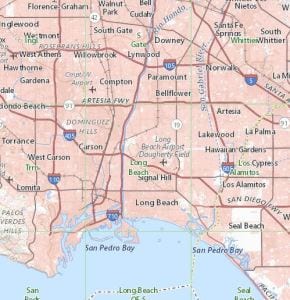 The study area is within the Dominguez Gap physiographic region of the Los Angeles Basin. And the basin is bounded by the Santa Monica Mountains to the north, the Puente Hills to the east, the Santa Ana Mountains to the south, and the Pacific Ocean towards the west. In fact, the Los Angeles Basin is part of the Transverse Range Geomorphic Province. The central block is known to include lowland portions of the coastal plain, where the study area exists.

The study area spans southwest from the Los Angeles River and is bounded by the coastline and the Los Angeles and Orange County coastal plain areas. The study area also includes the Downey Plain, which is a large area of recent alluvial sedimentation. In fact, the Downey Plain extends from the Ballona Gap, across the Coastal Plain of Los Angeles County, and into the coastal plain of Orange County. Recent alluvial deposits within the area include sands, gravels, silts, and clays. And coarser-grain sediments exist near the inland hills, as alluvial fans and finer-grain materials accumulate near the river flood plains. The study area also consists of the Paramount Syncline, on the down block east of the Inglewood fault that is forked by two other tributary faults.

The Holocene flood-plain deposits from the Los Angeles River make up the Coastal Plain and Downey Plain, and are the youngest sedimentary formations in the geology of Long Beach. In fact, the region comprises alternating deposits of marine sand, organic muds, and fluvial sands, silts, and clays. These surface deposits typically occur as deep as 180 feet below grade. These sediments are underlain by the upper Pleistocene Lakewood Formation. The Lakewood Formations reportedly comprises 250 to 300 feet thick, layers of non-marine terrace deposits, as well as marine silt, sand, and gravel. Below the Lakewood Formation is the early Pleistocene San Pedro Formation, which is mostly layers of sand and silt. And these layers are known to have interbedding characteristics.

During a series of Phase 2 Environmental Site Assessments and Methane Testing Investigations, Geo Forward oversaw the drilling and sampling of soil and groundwater samples to study the geology of Long Beach, California. Sampling activities were as deep as 25 feet below the ground surface. Per these observations,. soil samples predominantly appeared to be a brown silt (ML).

As per the USDA, Soil Conservation Service, Report, and General Soil Map of LA County, the shallow soils surrounding the study area are generally large-scale alluvial fans and flood plain materials. The Holocene flood-plain deposits contain alternating deposits of gravel, sand, silt, and clay, as deep as 180 feet below grade.

The surficial deposits are underlain by the Upper Pleistocene-age Lakewood Formation, which is also approximately 70-feet thick. The Lakewood Formation is non-marine and generally comprises fine to coarse grain sand and gravel with infrequent discontinuous lenses of sandy silt and clay. And the Lakewood Formation divides into two sub-units which contain the Gardena-Gage Aquifer and the Exposition-Artesia Aquifers (DWR 1961).

The Lakewood Formation is underlain by the Lower Pleistocene-age San Pedro Formation, a well-known unit in the geology of Long Beach. The San Pedro Formation consists of an approximate 600-feet thick stratum of marine and non-marine deposits. And these deposits contain gravel, sand, silt, and clay. In fact, the San Pedro Formation underlies most of the major basins within the greater Los Angeles area. And it is a principal water-bearing formation for groundwater production. This formation is split into several sub-units which contain the Sunnyside, Silverado, Lynwood, and Hollydale aquifers. And the aquicludes which separate these aquifers contain fine-grain sands, silt, and clay (DWR 1961).

The Pico Formation underlies the San Pedro Formation at an approximate depth of 700 feet below grade. Although contact depths may vary, as the formations generally dip towards the shoreline. The Pico Formation comprises marine deposits with medium to strong consolidation. For instance, sandstones, siltstones, limestone, and shale with interbedding layers of pebble- and cobble-size conglomerates (DWR 1961).

Nearby groundwater monitoring reports suggest groundwater depths in the study area can range from 6 to 20 feet on average. And flow directions are variable However, mostly flow towards a westerly direction.

The study area sits within the Central Groundwater Basin, which extends over most of the Coastal Plain of Los Angeles County. The Central Basin is bounded on the west and south by the Newport-Long Beach uplift and on the southeast by the Los Angeles-Orange County line. And on the north are a series of hills extending from the Puente Hills to the Elysian Hills (CDWR, 2003).

Groundwater enters the Central Basin through surface and subsurface flow and by direct percolation of precipitation, streamflow, and applied water in the forebay areas. Natural replenishment of the groundwater is largely from surface and subsurface inflow through the Rio Hondo and San Gabriel River spreading grounds at the Whittier Narrows (WRD 2005).

Groundwater in the Central Basin

Aquifers in the Central Basin

The “Central Basin Pressure Area” includes most of the southern portion of the Central Basin, and comprises aquifers that are confined by aquicludes and aquitards.

The near-surface aquifers presumably consist of semi-confined and unconfined aquifers of the Holocene Alluvial and wash deposits. For instance, there is the Bellflower Aquitard and the Gaspur Aquifer in the dune sands and Quaternary-age Alluvium. In fact, some of these hydrogeologic units are perched water, rather than a flowing aquifer. The Bellflower Aquiclude is a significant hydro-geologic barrier and is near the surface throughout the Central Basin Pressure Area.

The Lakewood Formation comprises marine and continental soils such as clay, silt, sand, and gravel from the upper-Pleistocene (CDWR, 2003). And it includes an uppermost semi-perched aquifer as well as the underlying confined aquifers (CDWR 1961). The underlying confined aquifers are the Gardena-Gage Aquifer, the Exposition-Artesia Aquifer, and the Jefferson Aquifer (DWR 1961, TLI 2007).

The Pliocene to Pleistocene San Pedro Formation mostly comprises confined aquifers. The Lynwood and Silverado aquifers exist in the upper segments of the San Pedro Formation. Whereas the Sunnyside Aquifer exists in the lower portion of the formation (CDWR, 2003).

Many variables can influence depths to groundwater and flow direction. However, below are two reliable sources of information, pertaining to the depths of the uppermost groundwater unit in the study area. Nonetheless, readers must know that drilling at various portions of the study area may yield results that differ from the sites below.

The California Water Resources Control Board (SWRCB) GeoTracker Database reports local groundwater monitoring data from various Cleanup Program Sites in the region. In fact, “Target Service Station #698” is overseen by the Los Angeles Regional Water Quality Control Board (LARWQCB) as case number 908050670. Per the database, this site contains groundwater monitoring data from November of 2007. And static groundwater levels at the Cleanup Site reportedly range between approximately 37.53 and 37.72 feet below grade. Additionally, the technical reports indicate groundwater flow towards the southeast.

Another Cleanup Program Site in the region is “Former Unocal/76 Station #2999” which is overseen by the Los Angeles Regional Water Quality Control Board (LARWQCB) as case number 908020216A. According to the database files, this site contains groundwater monitoring data from January of 2010. And static groundwater levels at the Cleanup Site reportedly range between approximately 32.28 and 35.11 feet below grade. Additionally, the technical reports indicate groundwater flow towards the south, at a gradient of 0.004 feet per foot.

The Newport-Long Beach fault zone (NIFZ) also trends across the study area in a northwest-southeast direction. The term “fault zone” emphasizes the occurrence of a series of interconnecting faults, rather than a single fault. Moreover, tertiary and younger sedimentary rocks structurally fold and deform along the NIFZ. And the Long Beach Anticline underlies Signal Hill and comprises of middle-Miocene through Pleistocene and Holocene sediments resting non-conformably on the Late Cretaceous to Late Jurassic Cataline Schist, a metamorphic rock (CDC, 1998).

The geology of Long Beach, California comprises massive subsurface pockets of petroleum deposits and marshlands. Because of these geologic features, the area also includes an abundance of oil and natural gas drilling activities. In fact, one of Southern California’s initial oil drilling sites commenced at the nearby City of Signal Hill, California. As a result, large quantities of natural gas and methane soil gas hazards also commonly exist in the study area.

Some nearby Cities publish maps of local methane hazard districts or zones. For instance, the LA City Methane Zone Map shows methane zones and methane buffer zones. Similarly, the nearby city of Huntington Beach produces a Methane Hazard District Map. As of September 2021, the City of Long Beach provides its own map of methane gas hazard zones. In fact, the Long Beach Building and Safety Bureau also maintains Methane Gas Mitigation standards in Chapter 18.79 of the Municipal Code.

DWR 1961. Bulletin No. 104, Planned Utilization of the Groundwater Basins of the Coastal Plain of Los Angeles County, dated June 1961.