This geologic description of Mars is possible due to public photographs by NASA’s Mars Perseverance rover. This photograph was taken on June 27, 2021 on Earth, or Sol 125 on Mars. The geologic description of Mars by this photograph may be incomplete or pending peer review. And geologic hypotheses are based on scientific theories and facts of the common terrestrial planet Earth. Nonetheless, students and geologists are welcome to openly contribute information to this post using the comments function below. All data is subject to review by a professional geologist prior to publication. Updated June 29, 2021.

Geology of Mars Interpretation in Photo on Sol 125 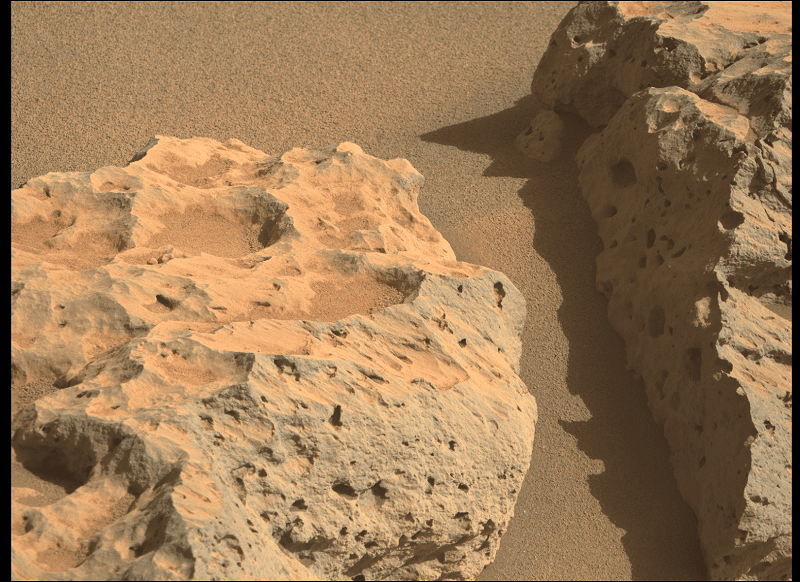 The rock formation of this photo is reasonably presumed to be an extrusive igneous rock, meaning it is a volcanic rock that once erupted and crystalized on the surface of Mars, or possibly underwater. This hypothesis is supported by the seemingly microcrystalline, aphanitic, and porphyritic texture of the outcrop. This texture occurs with extrusive rocks because there is a faster rate of molten rock cooling and solidification when above the ground surface, or in a body of water, as opposed to below the ground surface.

The igneous rock formation in the Mars rock formation of Photograph Sol 125 appears to be vesicular basalt. To illustrate, the Mars rock bears a striking resemblance to the photograph below, which is a vesicular basalt specimen on Earth (photo provided by the University of Pittsburgh, Department of Geology and Planetary Science). Both photographs show the common colorations of a basalt volcanic rock, as well as the same microcrystalline, aphanitic, and porphyritic textures. Thus, it is reasonable to presume the mineral assemblages, volcanic history, and geologic significance of the subject Mars rock, are similar to vesicular basalt on Earth. And this further supports theories of plate tectonics, faulting, seismic activity, volcanic activity, and the presence of water on Mars.

In the background of Mars Photograph Sol 125, the ground surface appears to consist of a sedimentary deposit. It is reasonably presumed this substance is a poorly graded sand, that is loosely consolidated, and dry. Although this section of the photographs does not demonstrate any large-scale abrasion-textures of the sand deposit surface, it is reasonably presumed to a section of an aeolian sand dune landform.

Aeolian sand dunes are large masses of sand grains that are subject to wind erosion and movement. And as a result, the ground surfaces elevations and slope directions are interchangeable with the weather conditions. And the sand grains are typically poorly graded, loose, and well-rounded. The sedimentary formation in the background of the Mars Photograph Sol 125 appears to be part of an aeolian sand dune landform. To illustrate, the sand bears a striking resemblance to the photograph below, which are the sandy surfaces of the New Mexico Yardangs National Monument (photo provided by the United States National Parks Service, Geological Resources Division). Both photographs show the common formations of finer grain and rounded sand particles, that are overall loose, dry, and poorly graded.