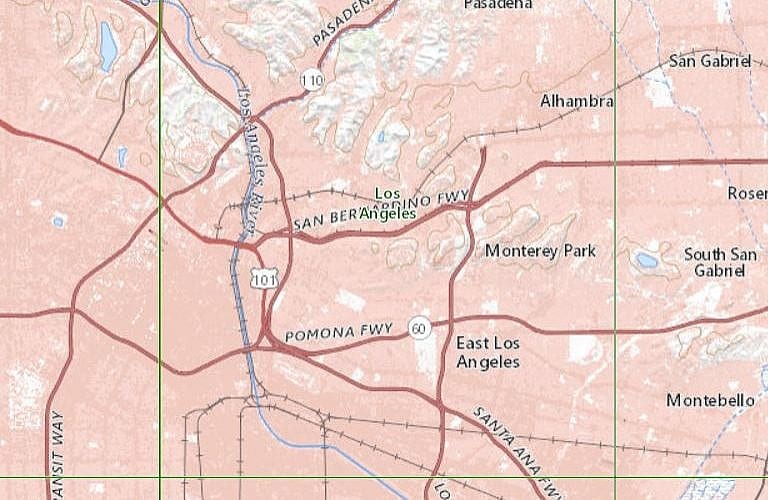 Geology of the Chinatown Area in Los Angeles, California & Hydrogeology

This post summarizes the geology of the Chinatown region, of Downtown Los Angeles California. Some geological and hydrogeological data may be incomplete or pending review. Nonetheless, students, geologists, and earth scientists are welcome to openly use, critique, and contribute information. To do so, please refer to the comments function below. Ultimately, all post data is subject to review by a professional geologist. Updated May 3, 2021.

The study area sits within the Los Angeles quadrangle of the United States Geological Survey (USGS) 7.5-minute topographic map. In fact, this post targets the Chinatown region of Downtown Los Angeles California. Chinatown includes hills and flatlands that are directly east of the Elysian Hills, of Elysian Park, California. And the geology discussed herein comprises the northern edge of the greater Los Angeles Basin. 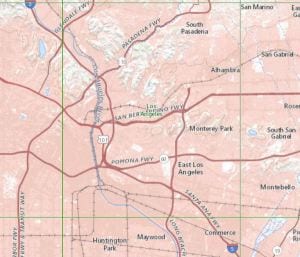 The study area is within the Peninsular Ranges geomorphic province, at the northern edge of the Los Angeles Basin. The focus area includes part of the Elysian Hills, as well as the surrounding flatlands. According to the USGS 7.5-minute topographic map, the study area can range between approximately 300 and 600 feet above mean sea level. And the local topography generally slopes towards the northeast.

The geologic information below is referenced from the Preliminary Geologic Map of the Los Angeles 30’ x 60’ Quadrangle, by the California Geological Survey (CGS) and the USGS. Additionally, Geo Forward referenced subsurface structural information from numerous geologic cross-sections across the Elysian Park-Repetto Hills areas, by the California Division of Mines and Geology (CDMG). Lastly, various drilling and lithologic logs from Geo Forward projects within the study area were also reviewed in the formation of this post.

Geo Forward has observed considerable amounts of artificial fill overlaying the study area. In fact, the artificial fill can exist as deep as approximately 15 feet below grade at some of the hillsides neighborhoods of Chinatown and Downtown Los Angeles. The artificial fill materials appear to be mixtures of the local sediments and more. For instance, a large portion consists of local clay (CL), silt (ML), sand (SP), and gravel (GP) of the local alluvial fan deposit. Moreover, the fill materials include debris and construction materials. For example, plastic substances, concrete fragments, red-brick, drywall materials, etc. Lastly, the fill also appears to contain gravel- to boulder- size fragments of the underlying Puente Formation siltstone and sandstone.

According to available geologic maps, reports, and cross-sections, the geology of Chinatown in Los Angeles comprises an alluvial fan deposit that overlays the Puente Formation bedrock. The alluvium dates within the Holocene epoch, and the bedrock comes from the early-Pliocene and late-Miocene epochs (CGS 2014). Historical drilling logs from the region suggest the Puente Formation comprises layers of siltstone, sandstone, and clay. And CDMG cross-sections presume the Puente Formation sedimentary rocks can span over 6,000 feet in thickness (CDMG, 1970). Although in some hillside areas, portions of And points of higher elevation generally show outcrops of the local alluvium deposit, which can vary from 15 to 30 feet of thickness atop the Tpnz bedrock.

Local drilling logs by Geo Forward suggest the artificial fill is generally a non-homogenous mixture of fine to coarse sand (SP) and gravel (GP), with medium- to low-plasticity clay (CL/CH) and silt (ML/MH). Additionally, cobble and boulder size fragments exist within the matrix of the fill. In fact, the fill matrix appears to correlate to the local alluvial fan deposit (Qf) descriptions below. Additionally, the fill comprises construction debris and locally disposed waste. The debris includes fragments of plastic waste, cement, brick, floor tile, road base, and more. And all fragments, whether geological or debris, range from angular to round, fine to coarse, and friable to well indurated. Lastly, colors range from light to dark brown, depending on moisture content.

The local alluvial fan deposit (Qf) comprises variable quantities of silt (ML/MH) and clay (CL/CH) with medium plasticity as well as poorly graded sand (SP) and gravel (GP). Additionally, trace amounts of cobble and boulders exist within the deposit. Colors range from medium to dark brown. And sand and gravel grains range from fine to coarse in size, and sub-angular to sub-round in shape.

Underlying about 10 to 30 feet of the alluvium in northern downtown Los Angeles is the Puente Formation bedrock (Tpnz and Tpna). It comprises a combination of siltstone and sandstone layers, with thin interbedded layers of clay. Colorations can range from yellowish-brown to a dark greenish-gray. However, in some areas, the sedimentary rock is grayish-black and has a petroleum-like odor. It is reasonably presumed that these grayish-black occurrences are the result of man-induced crude oil contamination during historical oil pumping activities. Lastly, the Puente Formation sedimentary rock appears to have a strong cementation factor all around, along with occasional block-forming fracture planes.

According to the City of Los Angeles Methane Zone Map, much of the geology in the Chinatown area of Downtown Los Angeles includes methane soil gas hazards. This is mostly due to the history of oil well drilling in the area, from the early- to mid-1900s.

The study area includes both types of hazard zones, which are Methane Zones and Methane Buffer Zones. As a result, the geological evaluations and land development projects in the area are likely to require methane testing and methane mitigation systems.

The study area lies within the Central Hydrologic subarea of the Coastal Plain Hydrologic Area of the Los Angeles Groundwater Basin (RWQCB, 1994). Groundwater within this region generally occurs in a series of semi-perched and confined aquifers, that flow within the alluvium that overlies the Puente Formation bedrock (DWR, 1961). The Puente Formation sedimentary rocks tend to be low-water bearing. However, fracture planes within the siltstone and sandstone units can contain and transmit groundwater (DWR, 1961).

According to the State Water Resource Control Board (SWRCB) GeoTracker Database, nearby environmental cases report groundwater elevations between 310 and 340 feet above mean sea level (SWRCB, 2021). Moreover, a series of hollow-stem auger drilling projects in the study area in 2016 indicates static groundwater levels are as shallow as 25 feet below the ground surface.

As part of a seismic hazard zone study within the Los Angeles California quadrangle during 1998, the Department of Conservation prepared a map displaying the historically highest groundwater conditions. The information reports first-encountered depths to groundwater from various geotechnical borehole logs. Based on a review of this map, the highest groundwater levels in the study area are approximately 15 to 20 feet below grade.