This post is a briefing on the geology of Needles, California. Some geological and hydrogeological data may be incomplete or pending review. Nonetheless, students, geologists, and earth scientists are welcome to openly critique, question, or contribute information to this post using the comments function below. All data is subject to review by a professional geologist prior to publication. Updated April 27, 2021.

Needles sits within the Mojave Desert Geomorphic Province in the California-Nevada-Arizona region. Needles is primarily underlain by thick Holocene and Pleistocene age alluvial deposits that slop towards the south-flowing Colorado River floodplain. In fact, the Colorado River plays a significant role in the geology of Needles, California, because the local deposits are accumulations from the highlands and the and upstream floodplains (Norris & Webb 1990).

During the course of drilling for several Phase 2 Environmental Site Assessments and contamination remediation projects in the Needles area, Geo Forward documents the overall lithology of the shallow subsurface materials. To illustrate, boring logs from a variety of job sites suggest the ground surface mostly comprises a poorly graded sand (SP) with variable amounts of gravel and cobble from 0 to 20 feet below ground surface. Most shallow soil samples appear to have no consolidation or cementation properties at these depths. And grains can vary in size from fine to coarse, with subangular to subround shaping.

Groundwater in the vicinity of Needles, California is found within the Needles Hydrologic Area of the Homer Hydrologic Unit of the Colorado River Hydrologic Basin – Region 7. And as of the year 2021, reports indicate that groundwater from this unit applies for municipal and domestic water supply, as well as agricultural and industrial uses (CO-River-RWQCB 2002).

According to various environmental data reports via the California State Water Resources Control Board (SWRCB) Geotracker Database, depths to first-encountered groundwater in the Needles, California region can range from 40 to 60 feet below ground surface. And groundwater flow directions appear to be variable from location to location. However, hydrogeological properties of water-bearing formations suggest groundwater generally flows west-southwest. Furthermore, static groundwater levels can be shallower than first encountered depths. In fact, static groundwater levels are generally shallowest near the Colorado River. 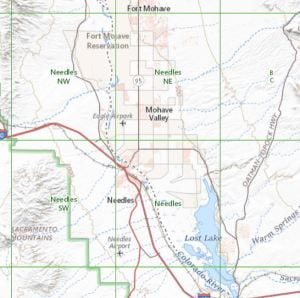