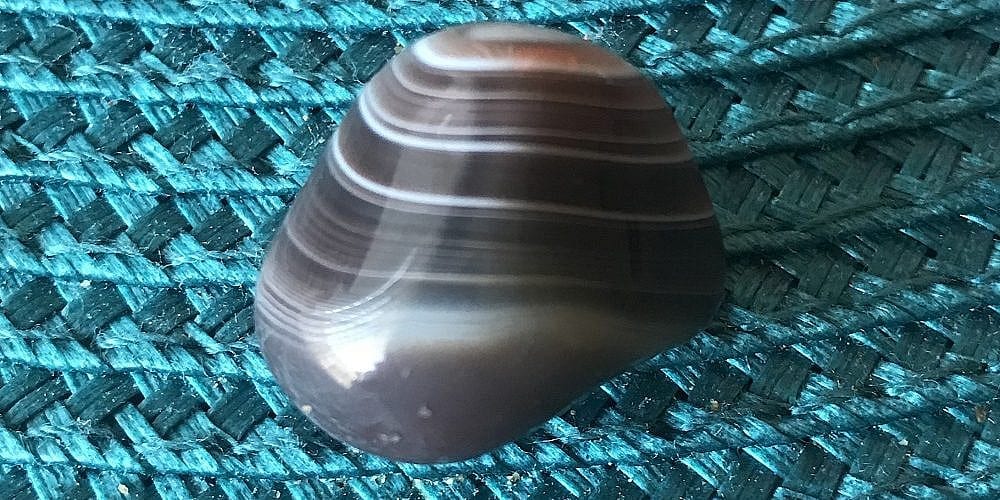 The agate crystal is a microcrystalline-quartz mineraloid that has a lustrous display of multi-color banding and results from long-term accumulations of siliceous groundwater deposits in rock cavities. Much like other mineraloids, all agate types form over thousands of years inside the existing voids of other igneous, sedimentary, and metamorphic rocks that contain silica-rich groundwater. And color formations and patterns can vary depending on numerous environmental factors. In fact, the layering and banding typically visible within an agate gemstone is representative of the shapes of the voids from which it develops. Agate is a popular and highly marketable stone amongst gem enthusiasts worldwide. This is mostly due to its colorful displays, mystifying geological origins, and its spiritual and cultural affiliations. Updated March 22, 2021.

How to Pronounce Agate

Despite the simple spelling of this gemstone, many inquire about its proper pronunciation. Professional geologists at institutions around the world pronounce agate crystal (in the American-English language) as “ae-get.” To demonstrate, the short video below provides a voice-recording of the formal pronunciation.

How the Agate Crystal Got its Name

The name “Agate” relates to the Greek name of the Dirillo River in Sicily, which was “Achates” or “Acate.” In fact, historians believe this is where the semiprecious stone was first discovered by the early earth scientist and Greek Philosopher named Theophrastus. Its initial discovery took place around 371 to 287 BCE. And since then, various cultures value this gemstone for its neat appearance and spiritual affiliations.

Physical Properties of the Agate Crystal

Although this siliceous gemstone isn’t a mineral, geologists still perform the appropriate laboratory tests to report its physical properties, in the same fashion. The following mineral physical properties apply to this mineraloid:

An agate gemstone can develop to display a variety of common colors. These stones can have numerous shades of one color, or a combination of entirely different colors. For example, in the photograph below, the specimen on the left displays multiple shades of different colors. Whereas the specimen on the right displays various shades of the same color. These color variations are the result of alternating silica composition, pH, and other chemical properties in groundwater at the time of crystallization. In fact, each display of color is the result of different sized silica spheres. And the color one sees is the material-specific light-reflection property.

An agate crystal forms within the cavities of other rocks in acidic to neutral environments. Its formation occurs by the accumulation of silica-rich groundwater in rock voids, over thousands of years. In fact, these chalcedony veins mostly develop within the voids of volcanic igneous rocks and plutonic igneous rocks. This is because igneous rocks have a higher tendency to hold groundwater over long periods of time. As a result, the semiprecious stone forms banding layers over time, that are generally parallel to the surrounding cavity walls.

Although it is possible, this mineraloid is less likely to form within metamorphic rocks and sedimentary rocks due to the lower chance of water retention. To illustrate, such rocks have higher porosity, permeability, and transmissivity properties, and result in groundwater moving through them rather than accumulating within them.

The agate gemstone is not a sedimentary rock, nor is it metamorphic or igneous. In fact, it isn’t categorizable as any one of the three geologic rock types. Some gem enthusiasts also debate whether it’s a mineral or not. However, in the scientific field of mineralogy, it is generally understood not to be a mineral either, but rather a mineraloid due to its amorphous physical properties and geochemical composition.

Agate is a Type of Chalcedony

The agate gemstone is a type of chalcedony (with translucent physical properties), which is a general name for a microcrystalline quartz and moganite mineraloid. In terms of chemical composition, chalcedony comprises quartz and moganite, which both maintain a silicon dioxide chemical formula, however differ in crystal structure. 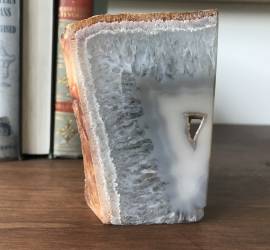 Agate is a type of Chalcedony

Silicates are compounds with crystal structures that contain SiO4 tetrahedra. Silicates are either isolated or joined to form groups, rings, single or double chains, sheets, or three-dimensional frameworks.

Unlike a geode, which similarly forms a series of protruding quartz crystals along cavity walls, the agate types actually develop chalcedony that fully occupies the void space. In some cases, it can crystalize with or within a geode.

All agate types naturally form different patterns and colors on the basis of the environmental factors at the time of crystallization. For example, the most significant factors are rock geochemistry, groundwater content, and pH levels. Additionally, timeframes for crystallization and geologic activity along the way also play a role. Variations in these factors, as well as other environmental components, can shift the formation towards different colors and banding patterns or thicknesses. Thus, producing different agate types.

Firstly, rock geochemistry refers to the mineralogy of the actual rock formation that has the cavities and voids in which the chalcedony develops. As imaginable, the water content and solution changes on the basis of long-term direct contact with a particular rock.

Secondly, the chemical composition of the groundwater itself plays a strong role in the formation of chalcedony. The water-chemistry of the liquid prior to reaching the stagnant and stationary location of the void in a rock, can make the liquid-phase solution further unique. The baseline groundwater chemistry relates to the previous soils that groundwater may have migrated through, as well as the rainwater chemistry prior to percolation.

And lastly, the pH levels of the surrounding soil and groundwater during the long-term process of formation changes the solubility properties of the liquid. And this is the result of numerous environmental factors, including but not limiting to biological influences, depositional climate, metamorphism of surrounding rocks, and more. Thus, an altering pattern of amorphous microcrystalline quartz and moganite forms overtime.

Lace agate types demonstrate bands, swirls, and concentric circles that make up intricate patterns resembling lace. These types can also comprise a wide variety of color combinations. For instance, the image below is of a blue lace stone.

This stone gets its name from the voids and cavities of the fossil that it develops within. Turritella snail shells resemble a small unicorn-horn-shape. And when this salacious mineraloid occupies the void spaces, it preserves the Turritells snail fossil.

One can identify Carnelian agate crystal by its warm hues of red and orange coloration. The banding is less prominent in this type of chalcedony, but it also appears to be more consistent. Moreover, the Carnelian stones appear to be somewhat more-translucent by comparison to the other stone types. However, some gemologists indicate variable translucency factors throughout specimens.

The Coldwater stone name comes from its distinct lack of vibrant coloration. The dominant colors of this stone are cloud-white to faint blue. Additionally, there are mute-grey hues that typically swirl throughout this varietal.

In reference to the original discovery of this semiprecious mineraloid, this title relates to the Greek name of the Dirillo River in Sicily, Italy. Colorations range from light to dark grey, red, tan, and blue, with concentric lines trending toward the center.  which can be hollow or closed.

Fire agate displays an iridescent coloration resembling mother-of-pearl. In fact, the two share similar properties. Nonetheless, it maintains a combination of bright green, red, yellow, and blue-accenting across a dark background. This can give the fire agate types an appearance much like that of black opal and fire opal. As a result, it tends to be a popular choice amongst collectors.

This Brazilian semiprecious stone mostly comes from southern Brazil. This stone is famous for its large size, as well as its circular and geodetic pattern. Naturally, it comprises a variety of colors, such as grey, white, blue, and reddish-brown. However, many street vendors artificially dye and polish them to appear bright pink, light blue, and purple.

Polyhedroid agate is a rare formation that exists in distinct geometric shapes with straight lines forming triangles and quadrilaterals. However, these shapes are not representative of the “cleavage” property of a crystal, because it is an amorphous mineraloid as opposed to a mineral. Instead, the geometric shapes simply represent the straight lines of the void-walls from which the siliceous groundwater solidifies overtime.

The plume stones exhibit a wide range of colors including blue, green, red, and purple, as well as some neutral tones. Nonetheless, an entire pallet of colors can exist in just one specimen. However, this varietal does not display banding, but rather a “plume” pattern. This appears to be similar to a thick smoke billowing from a source point.

Similar to the Plume stone, Condor type stones may showcase the entire spectrum of coloration in one stone. However, unlike the Plumes, this agate does display banding in a concentric fashion. With condors, each band often comprises a different color, to the effect of a brilliant rainbow display.

The Holley Blue Stone gets its name for the pastel tones of blue and purple. It may also contain variations of dark and light bands of color that swirl throughout each specimen.

The moss agate types get their name from the forest-green and blue-green hues. As the name suggests, the patterns have dark green coloration. It resembles moss growing on a rock.

The tube style stone comprises small and thin columns or “tubes” that form as the mineraloid develops. These formations result in tube-like shapes within the body of the post-crystalization agate. And when the sample is cut into slices, it typically appears with a pattern of cross-sectional circles across the stone.

Fortification agate refers to the classic banded stone that forms inward from the cavity walls. However, this type may have a hollow center with protruding quartz crystals. The colors can vary, and the name comes from the clearly defined bands resembling layers of walls, or “fortification.” 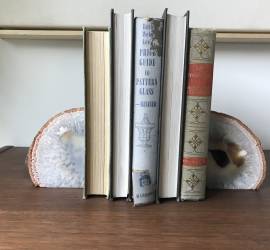 The Lake Superior agate gemstone is distinguishable by its range of red, blue, and white coloration. In fact, Lake Superior agate can range from pale to dark tones. And one common characteristic amongst this type of chalcedony stone is the banding of concentric and swirling patterns.

Binghamite is a rare variety of the chalcedony stone that forms in iron ore. The resulting coloration displays red, orange, and gold. Furthermore, most Binghamite has a distinct chatoyant, or reflective property. This is a characteristic most-visible upon polishing the stone.

Patuxent River agate displays warm hues such as pale yellow and peach, as well as deep orange and red. There are usually no bands present, and the colors generally blend smoothly. Additionally, this stone is somewhat translucent, allowing enough light to pass through to give the stone a warm glowing appearance.

Enhydro agate is essentially a mineraloid that is incomplete in the crystallization process. It usually demonstrates a dull bluish-grey color, although all color spectrums are possible depending on the environmental factors. But what makes the enhydro agate types unique is the fact that it contains groundwater inside. In fact, with expert-level cutting and polishing, an enhdryo stone can demonstrate an array of agate coloration and banding, with splashing water inside upon shaking.

There are numerous agate types. Those with a void in the middle are essentially incomplete in the crystallization process.

Like most gemstones, there are cultural and spiritual values with agate crystals, worldwide. Many cultures believe agate has spiritual cleansing power. For instance, agate assists in removing negative energy from one’s life and promotes the harmonious balancing of the mind, body, and spirit. Moreover, it is believed the gem helps clear a person’s mind, giving them the ability to focus on positive goals and tasks. Cultural beliefs also suggest the agate gemstone provides a calming element to a person’s life, allowing them to overcome anger, insecurities, and tension.