Geologists understand that methane on Mars could relate to possible signs of past life, future sustainability, and similar geological processes to Earth. And sources of methane gas in the Mars atmosphere are presumably from biogenic and petrogenic processes. For example, microbial and thermal decomposition of underground organic matter, or tectonic and volcanic activity. Additionally, the presence of methane may be a potential energy resource of natural gas and fossil fuels for human development in the near future. Updated July 13, 2021. 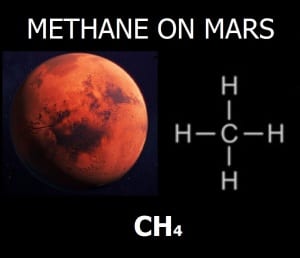 NASA’s Curiosity Rover and “Mars Science Laboratory” landed on Mars in 2012. Curiosity comprises a tunable laser spectrometer that can analyze the content of an ambient air sample near the ground surface. The spectrometer measures a sample’s absorption of light at specific wavelengths. As a result, it is capable of measuring concentrations of methane, carbon dioxide, and water vapor in select areas of the Mars atmosphere. Moreover, the European Space Agency’s ExoMars Trace Gas Orbiter was sent to orbit Mars in 2016. ExoMars studies the atmospheric gases of the red planet from roughly 400 kilometers above the Mars surface. The ExoMars Orbiter contains special gas analysis instruments that are also capable of detecting methane, water vapor, nitrogen oxides, acetylene, and carbon dioxide levels.

As of the year 2021, data suggests roughly 95% of the overall Mars atmosphere contains carbon dioxide (CO2) gas. And that less than 1% of the overall atmosphere potentially comprises methane (CH4). However, analytical data up to the year 2021 on the red planet is highly limited. And atmospheric conditions presumably fluctuate by location and altitude, as is the case on Earth. Nonetheless, forthcoming data via NASA’s 2020 Perseverance Rover, China’s Zhurong Rover, as well as other probes down the line, will help delineate the extent of methane on Mars, and close data gaps.

Methane Gas in the Mars Atmosphere

NASA’s Curiosity Rover and its “Mars Science Laboratory” continue to observe methane (CH4) gas above the surface of Gale Crater on Mars. As of June 2021, NASA reports an average concentration of <0.5 parts per billion by volume (ppb) of methane gas in the Gale Crater. And NASA also reports peak concentrations as high as roughly 20 ppb in various spikes. The ExoMars Trace Gas Orbiter is not reporting similar levels of methane gas from its position 400 kilometers above. Although data is limited at this time, this anomaly suggests the source of methane gas on Mars is potentially the subsurface. This means that methane on Mars can be petrogenic gas as a result of geological and thermal decomposition, or biogenic gas as a result of microbial decomposition.

Methane gas detections in the atmosphere of a terrestrial planet like Mars will be significantly lower in concentration than at its potential source underground. This is due to the dilution and volatilization processes when migrating towards a large airspace that has no means of confinement. Moreover, new exposure to ultraviolet rays, wind, and other atmospheric characteristics further reduce hydrocarbon concentrations in ambient air.

In the field of environmental geology, professional geologists calculate the theoretical concentration of hydrocarbon gases in the atmosphere, after it migrates from its source underground. Environmental scientists refer to this process as vapor intrusion modeling. And the model applies an attenuation factor against the data of a subsurface sample. In fact, this process can also be done in reverse.

An attenuation factor is a mathematical representation of dilution, whereby a reportable volume of methane underground reduces in concentration during its migration into the atmosphere. In fact, attenuation factors are reliant on site-specific geological, chemical, and physical characteristics. To illustrate, some variables are depth, molecular weight, barometric pressure, and formation pressure. Other factors are soil permeability, degree of soil saturation, soil porosity, and density. For example, a Phase 2 Environmental Assessment on Earth may report a high methane detection of 20,000 parts per million by volume (ppm) from a probe that’s 5 feet below grade… However, with the application of a 0.0001 attenuation factor, the ambient air above the probe results in a concentration of <2 ppm. In fact, atmospheric results maybe even lower considering typical outdoor air exchange rates.

Similarly, the minimal detections of methane gas in the open Mars atmosphere may be the post-attenuation result of much higher concentrations of methane soil gas, underground.

As of the date of this post, a methane soil gas test has not occurred on Mars. However, Geo Forward believes the recent atmospheric detections on Mars, along with soil gas migration knowledge on Earth, justify future soil gas testing on Mars.

To illustrate, methane soil gas tests near oil fields, landfills, and swamplands on Earth often report concentrations above 50,000 ppm. And the atmospheric air spaces above these testing sites generally report ambient air detections that are a small fraction of the subsurface detections. Similarly, the trace amounts of methane gas in the ambient airspace of Gale Crater of Mars may link to higher levels of biogenic and petrogenic methane soil gas in the underlying sedimentary formations of Mars.

Furthermore, the trace observations of methane in the atmosphere above Gale Crater do not dismiss the possibility that other parts of the atmosphere have higher concentrations due to continuous emissions from the subsurface.

It is currently unknown whether methane on Mars is biogenic or petrogenic. However, geologists currently hypothesize there being both forms of this hydrocarbon gas on Mars. And that the emissions occur from the subsurface via methane soil gas. In fact, the basis of this hypothesis reflects on how biogenic and petrogenic gasses behave on Earth. Nonetheless, both forms of this hydrocarbon gas can indicate past or present life on Mars. And both forms are equally beneficial to mankind for living and sustainability purposes. Although the Mars subsurface remains unexplored, scientists are planning drilling projects and geological investigations for the near future. Undoubtedly, more information about the atmosphere and geology of Mars will help scientists learn about the past, present, and future of Earth and Mars.

One thought on “Methane on Mars”