Women in geology have been making astounding contributions to the scientific community since the 1700s. From environmental engineering to mining, petroleum and water exploration, female geologists are increasing in numbers, and are valuable assets to these industries. The planet earth and it’s geological formations show no preference or priority of gender. Consequently, neither shall the sciences of geology, or anything else for that matter. And by demonstrating proficiency in both, the field and the laboratory, female geologists have a positive influence in earth sciences today. Updated December 15, 2020.

History of Women in Geology

Up until the 1700s, the field of geology hadn’t been as disciplined as it is today. In fact, the subject was seemingly broad, encompassing a blend of biology, botanology, and oceanography. Records show that most geological theories (prior to the 1800s) stem from European researchers, such as Thomas Burnet of England, Charles Lyell of Scotland, or Horace Bennedict of Switzerland. Women in geology were scarce in the beginning. To illustrate, Etheldred Benett is notably the first female geologist and/or paleontologist, and the only one of her time. Bennet was an avid collector of paleontological artifacts throughout the United Kingdom, and worked alongside numerous male geologists in the late 1700s. Since then, many other inspiring female geologists have similarly risen through the ranks in universities, industry and geological societies around the world. The discussion below is about a few of the environments that women in geosciences prevail today.

Many a woman have successfully accomplished higher-level educational programs in the field of geology, and have also gone on to further contribute by teaching. For instance, one of today’s most esteemed geophysicists and experts of plate tectonics is Dr. Tanya Atwater. Dr. Atwater studied the geological disciplines at M.I.T., U.C. Berkly and the U.C. San Diego Scripps Institute of Oceanography in the 1970s. Today, she teaches at U.C. Santa Barbara, and dedicates her expertise to studying the Western Transverse Ranges and the San Andreas Fault complex in California. Her theories and animations are studied by earth science students from around the world today. And there are many other women in geology with stories just like Dr. Atwater’s.

Each of the geological disciplines today are known to employ female geologists. And in these industries, entry-level workers start by splitting their time between the field, office, and laboratory. However, as one progresses into the career, an individual’s proven area of success (along with their preference) results in their full-time position in one of these settings. Many females in geology have proven their success in the office, field, and laboratory.

The laboratory isn’t the most popular place to be amongst typical geologists (female nor male). Usually, the job-site is the choice spot. Nonetheless, some pretty important work gets done there. Many females in geology have shown their proficiency in laboratory work. For instance, in the geotechnical engineering industry, scientists perform intensive soil and rock sample analysis, which requires a great deal of accuracy and precision. And the testing procedures require a strong background in chemistry and physics, as well as soil mechanics. As the number of females in science rises, so do women in geology.

Whether female or male, there is no doubt that the field is typically where geologists like to be. And when outdoors, the earth knows no difference between man and woman. The passion for being outdoors is usually what attracts aspiring geologists to the science in the first place. Otherwise, the standard coursework of geosciences will groom the students into becoming comfortable with working outdoors. In fact, one can reasonably expect up to two (or more) weekend-long fieldwork trips for each geology core level course during their undergraduate program. And all students, regardless of gender, race or orientation, are must attend and perform optimally. 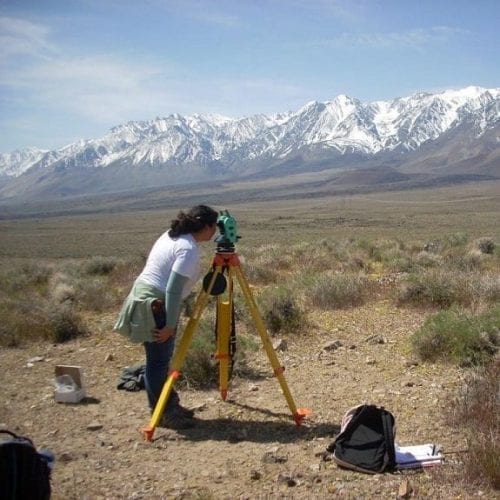 Regulatory agencies are the ultimate powerhouse when it comes to the work geologists do. To illustrate, all of the geological efforts within the petroleum exploration industry, hydrology, mining, and engineering industries are up for final review and approval by various regulatory agencies. For example, in the environmental engineering field, groundwater contamination cleanup actions are overseen by the local water quality control board. And within these agencies, are highly educated and esteemed geologists and engineers, who are trusted by the State to make sure things are done correctly. Today, regulatory agencies of all jurisdictions are known to employ many women in geology.

History’s women in geology have gifted humanity in many ways. Below are some of the many feminist influencers of our time (the era of humans), who light the torch for future geologists, whether male or female.

Among all historical females in geology, Etheldred Benett is the first. Benett was from one of England’s wealthiest families at the time and had a personal passion for fossils found in earth formations throughout the western and southern cusps of the United Kingdom. Benett’s involvement contributes to the early development of geology and paleontology because information at the time was scarce and the subject matter was broad. At the time, she worked with the UK’s leading earth scientists, and executive members of England’s Geological Society. Much of her work has helped develop the modern geologic time scale, as well as theories of evolution and geologic formation deposition. Today, many of Bennett’s specimens are up for display in museums and universities around the world.

Elizabeth Carne was another early female earth enthusiast, who was actually the first woman elected to become a member of the Royal Geological Society of England. Similarly, as Ethelred Bennet, Carne was also born into one of England’s wealthiest and financially influential families. As a result, her personal interests in nature, geology, and mineralogy provided a boost to the earth science community during the 1800s. Elizabeth Carne was also a writer and philanthropist who focused her contributions to earth and human environmental studies.

Janet Vida Watson is unarguably a feminist icon in the scientific community. Watson was an English geologist, technical author, and astounding professor of earth sciences in London England. Watson also holds the title of being the first female president of the London Geological Society, during the year 1982. During her Ph.D. program, Watson studied the Precambrian geological formations and basement complexes that makeup Scotland and other areas of the United Kingdom. And her contributions and theories revamped the society’s concurrent hypothesis regarding the chronology of early UK basement formations.

Unlike the women in geology above, Marie Tharp was American. Tharp is most known for preparing with first geologic map of the Atlantic Ocean. And this work informs the world about the extreme topographic relief and landscaping of the ocean floors. Most importantly, this work introduces the concept of the mid-ocean ridge system underlying the Atlantic Ocean. Consequently, this ridge system contributes to tectonic movement and the theory of plate tectonics.

Dr. Tanya Atwater is a great role model for women in geology, a leading modern geophysicist and master of plate tectonic theory. Today Dr. Atwater teaches at the University of California, Santa Barbara, and devotes her brilliance to studying and explaining the San Andreas Fault complex in California, especially within the Western Transverse Ranges. Dr. Atwater is most known for her video animations, which visually enhance one’s ability to understand complicated fault and tectonic systems. And her animations, writings, and lectures help simplify structural geology complexities for students and professors, worldwide.

The Future of Geology & Earth Science

The geoscience fields for women are strongly encouraging at this time. Workforce data trends indicate a quickly closing gender gap in all disciplines of geology, and not just at the early career stages. Studies indicate that as of 2018, women in geology currently make up approximately 20% to 30% of the faculty in most academic institutions, worldwide. However, as more females pursue higher education in geology and its disciplines, the community anticipates ratios of 50% in the near future. Similarly, the geological workforce anticipates the same trends in both the public and private sectors.