This post summarizes the basic geology of the East Hollywood region of Los Angeles California. Some geological and hydrogeological data may be incomplete or pending review. Nonetheless, students, geologists, and earth scientists are welcome to openly use, critique, and contribute information. To do so, please refer to the comments function below. Ultimately, all post data is subject to review by a professional geologist. Updated July 13, 2021.

The study area sits within the central block of the Los Angeles Basin. To the north-northwest, are the Santa Monica Mountains (nearest to the portion of Griffith Park). The Elysian Park Hills are southeast of the basin, and farther south are the Santa Ana Mountains. And the Pacific Ocean is the western boundary. The Los Angeles Basin is part of the Transverse Range Geomorphic Province. And the central block is known to include lowland portions of the coastal plain (Norris and Webb 1990).

The Peninsular Ranges comprise northwest-trending, strike-slip faults. Whereas the Transverse Ranges comprise east-west trending, reverse faults, and thrust faults. But the geotectonic activity of this region is controlled by the relative strike-slip fault motion of the Pacific Plate and the North American plates via the San Andreas Fault. The east-west trending structure of the Transverse Ranges province is a consequence of compression between the Pacific Plate and the North American Plate. And the rotation of the province around the “Big Bend” of the San Andreas fault system is what creates the uplift of the San Gabriel Mountains.

According to the Planned Utilization of the Groundwater Basins of the Coastal Plains of Los Angeles County, most of the basin sits atop a Quaternary-age alluvium formation, comprising layers of clay, silt, sand, and gravel. And these sediments are the product of fluvial deposition, via the formerly meandering Los Angeles River.

According to the Seismic Hazard Zone Report for the Hollywood, California Quadrangle, the alluvium overlies a shallow pre-Quaternary bedrock. The California Department of Conservation report suggests this bedrock is either the Miocene Puente Formation or the Fernando Formation (CDC 1998). These bedrocks are a series of marine and non-marine deposits of interbedding siltstones and sandstones with laminations of diatomaceous shale and siltstone. In fact, higher groundwater transmissivity in the bedrock occurs within the fracture planes (Dibblee 1989).

Groundwater enters the basin through surface and subsurface flow. This is the result of precipitation and direct percolation, as well as streamflow. Natural replenishment of the groundwater is largely from the runoff water of the Santa Monica Mountains, and the San Gabriel Mountain. And some replenishment occurs via percolation from the Los Angeles River. Groundwater levels fluctuate due to changes in annual precipitation. Moreover, regional municipal wells pump groundwater at variable rates each quarter, further impacting the potentiometric surface of underlying confined aquifers, and unconfined aquifers.

According to the California Water Resources Control Board (SWRCB) GeoTracker Database, Cleanup Program Site “TOSCO – 76 Station” is located in the southern boundary of the study area. And this leaking underground storage tank (LUST) case is overseen by the Los Angeles Regional Water Quality Control Board (LARWQCB) as case number 900190089. In fact, groundwater monitoring reports indicate static groundwater ranges between approximately 50 and 60 feet below the ground surface.

The direction of Groundwater Flow

Shallow groundwater in this general area is understood to be variable in the flow direction, on the basis of monitoring well data and the seismic hazard report’s groundwater contour map. However, topographic relief and a larger-scale overview of the contour maps suggests groundwater generally flows north-northwest. 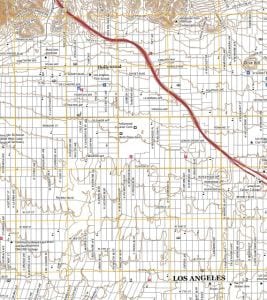