What is a Vapor Barrier Membrane for Soil Gas Mitigation?

A vapor barrier, or a sub-slab vapor membrane, is a layer of protective material that prevents toxic vapor intrusion into buildings. An impervious vapor barrier can be a combination of plastic film, fabric, and sheets. And there are also roll-on and spray-on applications. Contractors usually install soil-gas mitigation barriers under the slab and around retaining walls, on the basis of vapor intrusion test results. There are various grades and classifications of vapor barrier material, that professional geologists specify in human health risk assessments and mitigation plans. The end result prevents any toxic vapor from an underground contamination plume from harming the occupants of a building. Updated May 20, 2021. 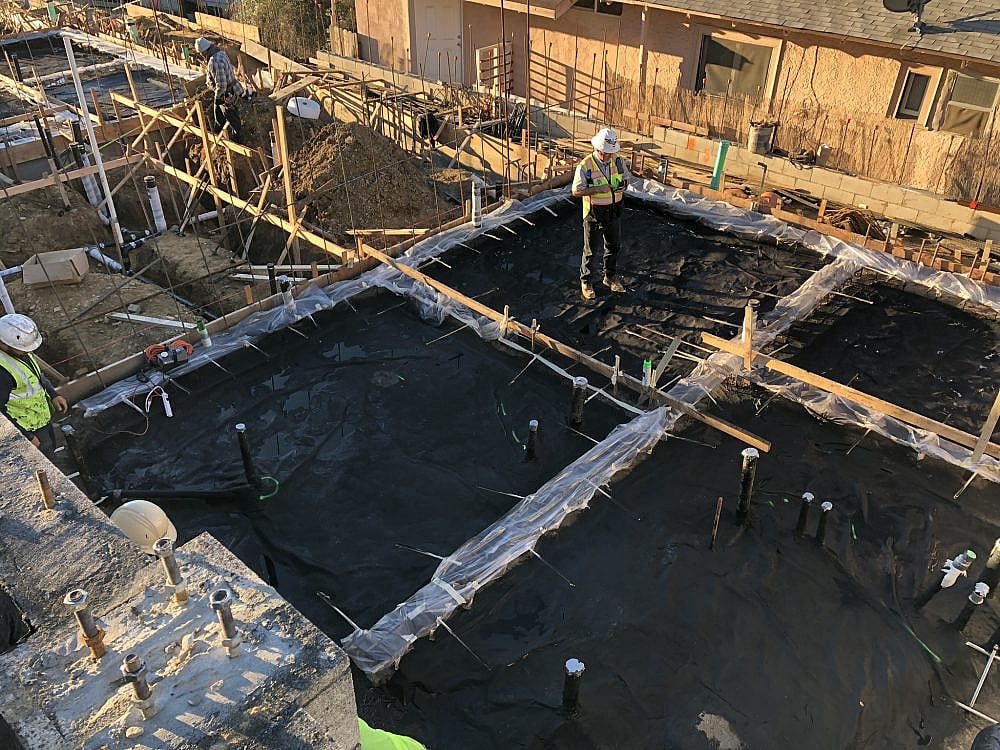 Why Install a Vapor Barrier?

There are different reasons to utilize a vapor barrier. And the exact needs of the project dictate the specific type of membrane that is most appropriate. For instance, some soil vapor, such as water vapor, is non-toxic. But it can still cause structural damage and mold growth. In such cases, engineering geologists perform moisture content tests and specify barrier materials solely for waterproofing purposes.

On the other hand, some soil vapors are toxic, due to the underlying soil and groundwater contamination. Various volatile organic compounds (VOCs) pose a silent human health risk to building occupants atop contamination plumes. Similarly, the underground pollution of semi-volatile organic compounds (SVOCs) and hydrocarbons also tend to impact the indoor air quality of overlying buildings. And different types of chemicals in the contamination reflect different mobility characteristics within concrete, soil, and plastic. Thus, geologists perform environmental site assessments to specify the precise chemicals of concern. Afterward, environmental professionals specify a particular vapor membrane material that blocks the incursion of each chemical of concern.

Another vapor that presents a risk by intrusion is methane soil gas. Methane is a large part of natural gas, which stems from subsurface accumulations of decaying petroleum. Methane soil gas presents a problem to modern living, mainly because it is flammable, colorless, and odorless. It can easily migrate through a building slab and foundation and build up to combustible concentrations indoors.

The porous nature of concrete allows soil moisture to infiltrate a slab or retaining wall. And moisture can make its way through walls and flooring, causing issues with humidity, mold, and structural damage. Thus, vapor barriers are waterproofing barriers. The system protects foundations against the water vapor that accumulates beneath the slab, or behind the wall. For example, the side of a structure that has a retaining wall should have a vapor barrier waterproofing system because it directly contacts soil from a hillside. And as rain occurs over time, the soil retains small volumes of percolated water content into its pore spaces. As a result, the ongoing moisture content of the soil makes direct contact with the retaining wall surface and penetrates it.

The outcomes of moisture penetration are usually structural damage, facade damage, and mold growth. Although, in cases where the groundwater table or an influx of precipitation water contacts a foundation, there can be flooding damage. A standard vapor barrier to guard against moisture is a single layer of at least 6 mils (0.006-inch thickness) or thicker “poly” plastic. And more advanced systems and materials are necessary to protect from the hydrostatic pressures of groundwater. Poly plastics comprise a group of polymers including polyethylene, polypropylene, and polyolefin.

Another common vapor barrier application relates to methane mitigation. In fact, high levels of methane are common around petroleum fields and landfills. And methane is known to enter overlying structures through cracks in the foundation and small pores in the concrete. Concerns about methane intrusion in methane zones and methane buffer zones lead to strict building and safety codes for construction. For instance, the LADBS maintains standard methane mitigation plans for projects within methane hazard zones. Accordingly, the standard plans contain details and notes for a vapor barrier that defends against vapor intrusion.

There are different types of methane vapor barrier materials. And each make and model serves provides different purposes. For instance, some additionally provide robust waterproofing utility against the hydrostatic pressures of a contacting groundwater table. Whereas others simply defend against low concentrations of sub-slab methane gas. Typically, there are multiple layers. To illustrate, these systems usually include a base layer of polymer film, a high-viscosity asphalt sealant, coats of low-viscosity asphalt emulsion, and a protective geo-fabric layer on top.

Vapor barriers are useful where a site has been impacted by VOCs, petroleum hydrocarbons, or other chemical contaminants. In this capacity, vapor barriers play a vital role in the overall remediation and redevelopment of a site. While it is possible to retroactively apply vapor barriers at an existing structure, it usually occurs during the construction phase. And vapor barriers can be an important part of the revitalization initiatives with Brownfields sites.

The type of barrier applications for these projects resembles the methane barriers (discussed above). Although, slight variances exist in the barrier material composition, in order to appropriately block the site-specific chemicals of concern. The future utilization of sites like this depends on a reliable barrier to prevent VOC vapor intrusion. And with proper installation, an impervious membrane will prevent chemical vapors from entering the structures built under sites undergoing contamination remediation. For instance, the barriers are often used in conjunction with soil vapor extraction (SVE) systems as part of a comprehensive remedial action plan (RAP).

Cost of a Vapor Barrier

While the sub-slab installation of a vapor barrier will increase the cost of construction, it is the only responsible way to safely develop a property that is at risk for vapor intrusion. And, it may very well be the only legal way to build on a site that is overseen by local regulatory authorities. The cost of a vapor barrier is usually less than the potential cost of structural damage or health risks associated with vapor intrusion.

The cost to install a vapor membrane can be kept down with planning and integration at the early phases of construction. It is possible to retrofit a vapor barrier down the line, but it is much more cost-effective to apply during construction. If a vapor barrier is not legally mandatory, it is still a prudent decision to install the protective layer for preventative care reasons to future contamination cases. This will ensure that inhabitants are protected from problems arising in the future that will end up being more costly in the long run.

If developing a property with vapor intrusion concerns, a consultation with a professional geologist is a great place to start. A geological consultation reviews data and standards of the project area, as well as the latest technologies and methods for vapor barrier applications.